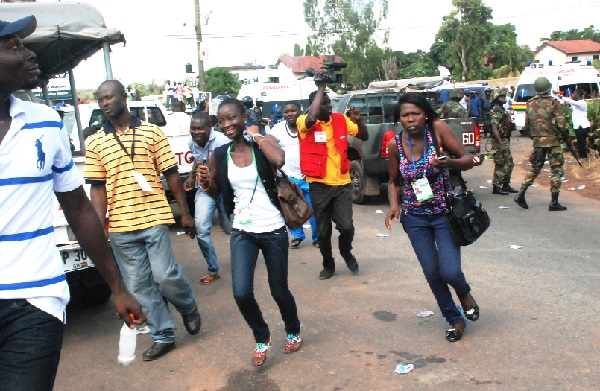 FLASHBACK: Media personnel running for safety at Dzorwulu in the Ayawaso-West Wuogon Constituency riots during a bye-election
30.5k Shares

The Chairperson of the National Commission for Civic Education (NCCE), Kathleen Addy, has called on Ghanaians to reject politicians who resort to the use of violence and disruptive tendencies to gain political power as the country heads to the 2024 general election.

Ms Addy said perpetrators of political violence should no longer be allowed any space to operate because apart from posing serious security threats to the country, their activities denied the citizenry the right leaders who could help consolidate the country’s democracy.

“Fellow citizens, it is our duty to punish politicians who employ insults, intimidation and violence in their quest for power and position. Let us deny them what they seek, so that they will learn their lessons,” she stressed.

Ms Addy made the call at a media engagement organised by the NCCE in Accra last Saturday to commemorate the 30th anniversary of the Fourth Republic and the National Constitution Day.

Since the advent of the Fourth Republic on January 7, 1993, elections in Ghana have experienced conflict situations that have led to pockets of violence, sometimes leading to the loss of lives.

The conflict situations have manifested in the use of insults by political activists and political vigilante groups who attack political opponents and visit mayhem on them during the electioneering.

As recently as 2020, eight people were killed in election-related violence that occurred during that year’s presidential and parliamentary elections.

The Ghana Policec Service confirmed those figures in a situational update after the December 7, 2020 polls, disclosed that 15 other people suffered varying degrees of injury, mostly from gunshots.

The violence was recorded in Tamale, Techiman, Odorkor, Ablekuma and Savelugu during the collation of results.

Against that backdrop, the NCCE Chairperson said it was about time the citizenry rose against the masterminds of political violence by not only refusing to be part of their schemes but also exposing them.

“From now till elections are held on December 7, 2024 and beyond, not a single drop of blood should be shed for political gain. No politician is worth it. By all means, actively participate in the election processes, but do not be lured into illegal activities,” she stressed.

Ms Addy urged the citizenry to familiarise themselves with the Public Order Act, 1994 (Act 491), as well as the Vigilantism and Related Offences Act, 2019 (Act 999), to understand the consequences of political misconduct.

She commended the two leading political parties in the country — the New Patriotic Party (NPP) and the National Democratic Congress (NDC) — for the relatively peaceful manner in which they conducted their internal elections.

The NCCE Chairperson implored the leaders of the two parties, who were often at the centre of political conflicts, to translate the peaceful conduct of their internal elections to the general election.

“It is our hope that all actors in the political arena, including journalists, foot soldiers, bloggers, presenters, politicians and so on, will commit to a campaign devoid of suggestive ill-intent, insults and incendiary language.

“Dear political actor, please challenge yourself to be part of the solution and not the problem,” she said.

Touching on the district-level elections, that is, the election of assembly and unit committee members to be held later this year, she called on all stakeholders to play active roles to make them successful.

Ms Addy said given that district-level election formed the basic unit for citizens’ participation in governance, it was important for the key actors to work together to improve on the patronage of those elections.

“On the average, participation in district level election is rather poor, with turnout usually around 30 per cent. It is our hope that this time round, Ghanaians will turn out massively to elect assembly members and actively hold them accountable in the period between elections,” she said.