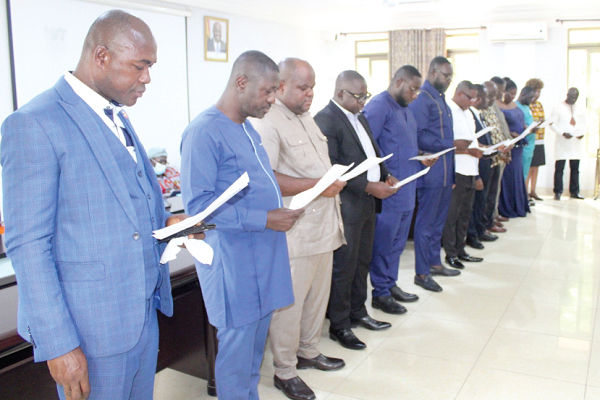 Members of the Eastern Regional Council of the GNCCI taking their oath of office
30.5k Shares

The Ghana National Chamber of Commerce and Industry (GNCCI) has inaugurated and sworn in its first Eastern Regional Council members to help expand the services of the association in the region.

In an interview with the Daily Graphic, the President of GNCCI, Clement Osei-Amoako, indicated that as the Eastern Region contributed significantly to the Gross Domestic Product (GDP) growth of the country, there was the need for the expansion of the Chamber of Commerce to the region to harness all private institutions and businesses from diverse sectors.

He said that the expansion was necessary because the GNCCI was regarded as the leading private chamber and more businesses needed to fall under its umbrella to make their voices stronger on issues of concern to the business community.

Mr Osei-Amoako said "some of the issues that we are confronted with between now and December have to do with the interest rate and inflation and these are the main macroeconomics we have to look at, but the difficulty is that they are supply driven and not under the mandate of the Central Bank apart from the interest rate”.

The President of GNCCI urged businesses in the Eastern Region to join the GNCCI to also benefit from the support schemes and have business partners for the growth of their respective businesses.

He urged the council to, in its quest to develop businesses in the region, improve on the quality of their products, packaging and other features in the wake of the implementation of the Africa Continental Free Trade Area (AFCFTA) Agreement.

He added that the agreement had enormous opportunities for businesses in Ghana but they should not lose sight of the fact that it was also going to increase competition in goods and services within the continent; hence the need for businesses to prepare adequately.

The Eastern Regional Chairman of GNCCI, Mr Oware, thanked the association heads for the trust reposed in him to lead the first council inaugurated in the region.

He pledged to work hard with his team to achieve the target ahead by selling the association to all businesses in the region to expand their frontiers and help businesses grow in the region and the country at large.