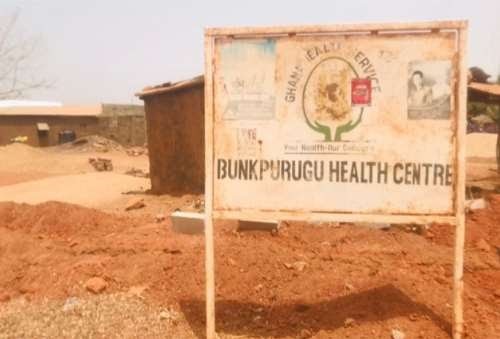 The Bunkpurugu Health Centre in the North East Region is virtually closing down due to the unavailability of drugs and essential medical supplies.

The situation at the facility, which is the district referral centre, has affected healthcare delivery in the area.

Patients who visit the facility with conditions that could be handled at the health centre are directed to the Bindu Government Hospital, which is about 100 kilometres away.

Some patients on admission at the facility are sometimes compelled to buy prescribed medications from chemical shops in town, sources told the Daily Graphic at the health centre.

The facility has only two wards — a maternity ward and another that keeps both male and female patients on admission. The ‘unisex’ ward does not have a washroom.

The Medical Assistant of the facility, Ibrahim Abubakar, declined to comment on the situation.

The District Chief Executive for Bunkpurugu/Nakpanduri, Joseph Louknaan, however, indicated that the health centre had run out of medical consumables due to the non-payment of National Health Insurance Scheme (NHIS) claims.

“I have received several complaints, so I had discussions with the District Health Director, and he indicated that due to the non-payment of claims they are not getting the drugs from the Regional Medical Stores.”

“We don’t also have accredited pharmacies here whereby the health workers can always prescribe for the patients to go and collect so that NHIS will pay later. So the only option for the facility is to prescribe for them to go and buy,” he said.

He said the facility was not up to the standard of a health centre, adding: “I believe that when we finish the Agenda 111 hospitals project, it will help solve the problems”.

Currently, all three ambulances of the health centre have broken down, compelling the public to use motorbikes to transport patients on referrals.

A pregnant woman, Naamimok, told the Daily Graphic that a drug was prescribed for her to purchase from town because the drug which was covered by the NHIS was not in stock.

“The challenge is that I am a pregnant woman, and the drug stores in town are far from here,” she said.

Another resident, Konlan Larbik, appealed to authorities to supply the facility with medical consumables to enhance healthcare delivery.

“The reason why we do not have enough medicines in our facilities, both in the Northern and North East regions, is that we have incurred debts so high that now the suppliers are saying if you don’t pay they won’t supply.”

“As at close of yesterday, North East alone is owing about GH¢6 million and Northern Region is owing just about same, and Savannah Region is owing just a little above this. So if we are not able to pay the suppliers, a time will come that when we call they will not respond, and our facilities will remain empty,” he said.