Bridge to be constructed over Oti River — President Akufo-Addo 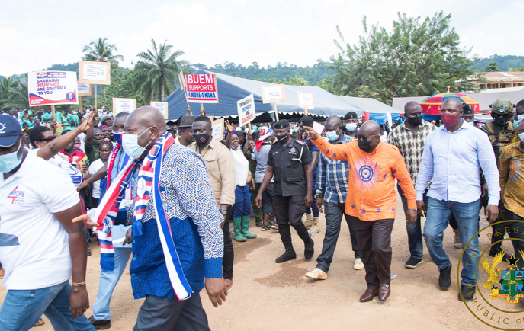 President Nana Addo Dankwa Akufo-Addo has given an assurance that plans to construct a bridge over the Oti River at Dambai are on course.

He said feasibility studies were being undertaken to locate where the bridge could be constructed.

President Akufo-Addo gave the assurance yesterday in response to an appeal by the President of the Oti Regional House of Chiefs, Nana Mprah Besemuna III, at a durbar to welcome him to Kete Krachi as part of his two-day working visit to the region.

Nana Besemuna, who is also the Krachiwura, said a bridge over the river would facilitate the easy movement of people and goods from Kete-Krachi, Dambai and other communities, especially hard-to-reach areas to other parts of the country.

It would also reduce congestion at the river bank where passengers queued to board a pontoon at Dambai to Kete Krachi and its environs, he added.

He said the bridge was an important project that would boost economic activities in the area and speed up development.

Members of the Oti Regional House of Chiefs at the durbar

President Akufo-Addo said it was during his tenure as President that the Oti Region was created and, therefore, urged the people to support the governing New Patriotic Party (NPP) to win another term so that the government could deliver all developmental plans for the region.

"We must understand that any programme and initiative that will bring improvement and development to Krachi is what I am after, so you must vote for the NPP to complete all the development plans for the region," he said.

As part of his visit, the President inspected work on Kete Krachi town roads, a 15-kilometre stretch awarded to First Sky Company Limited.

The scope of work include drainage construction, earthworks, pavement works and asphalt overlay and it is expected to be completed in 2022.

Nana Besemuna thanked the President for the various town roads ongoing in the region, especially within Kete Krachi, and said: "We are happy and grateful that work is progressing steadily. We have no doubt that at the rate of progress of work, when the contractor is supported, he will do a lot by December."

He appealed to the government to support contractors with all the needed funds to complete the roads on time.

The Krachiwura appealed to the government to also establish a technical university in Kete Krachi to provide a technical education base for young people in the region to have technical and vocational skills.

He said that would create varied avenues and opportunities of employment among the youth.

He also requested that a water treatment plant be provided for the town to produce potable water for the people.

The Minister for Regional Reorganisation and Development, Mr. Dan Botwe, urged the people of the region to show gratitude to the President for their region by voting for the NPP to retain the President in power in the upcoming election to enable him to bring further development to the region.