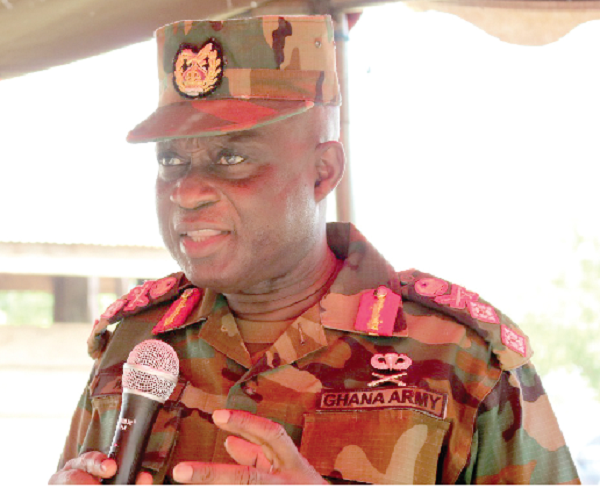 Residents of Kpoeta Achem in the Ho West District of the Volta Region, a cross-border community between Ghana and Togo, have been urged to exercise restraint as Ghana continues to engage Togo over the delimitation of the international land boundary between the two countries.

As such, the residents have been advised to continue to comply with the existing ban placed on farming activities on lands near the boundary line that separates the communities from Hanyigba Todzi, a community in Togo.

The Chief Executive Officer (CEO) of the Ghana Boundary Commission (GhBC), Major General Dr Emmanuel Kotia made the call when he led a team from the commission to undertake a mapping survey and community sensitisation programme in the area on Friday, December 10, 2021.

The team also engaged the traditional leaders of the Kpoeta Achem, Ashanti and Todzi communities on historical data concerning the international boundary line between the community and the Togo side.

Boundary Delimitation (demarcation) is a process by which two sovereign states establish and describe in writing the location of their common boundary.

The survey has become necessary following some disagreements between the communities which were said to have in the past, caused some attacks and reprisals by both the Kpoeta and Hanyigba Todzi communities, resulting in the loss of some lives.

Speaking at the community sensitisation programme, General Kotia said that following a visit to the site and the inspection of the boundary pillars by the commission and district security council, a decision was taken that both residents of the Ghana and the Togo side should avoid any form of activities in areas within the boundary line.

The measure, he said, was to ensure that discussions initiated would ensure a lasting solution was found to the problem.

He advised the residents to protect the boundary pillars while undertaking any form of farming activity in areas that they may be permitted to operate in.

“In doing so, avoid destroying the boundary pillars because they are the legacy points which we can rely on in our engagements with our Togolese counterparts and when destroyed will affect the markings so far as the international boundary line with that country is concerned,” General Kotia said.

General Kotia also counselled the communities to report the destruction or removal of the boundary pillars they may come across as they undertook any activity in the permitted areas.

Ghana, he said, wishes to live peacefully with its neighbours, hence the need to ensure the avoidance of incidents or issues that may arise to create problems for the neighbouring country as well.

He also commended the chiefs and people of the three Kpoeta communities for the support they gave the field officers of the commission and also providing the legacy documents which he said would be helpful in their engagements.

The Regent of Kpoeta Achem, Togbe Solomon Komlaga, for his part, said the interventions put in place by the government had minimised the occurences of incidents such as assaults and arbitrary arrests of their citizens that affected their livelihoods and expressed the hope that an amicable solution wouldbe found to the issue.

The District Chief Executive(DCE) for Ho West, Mr Ernest Victor Apau, for his part, said the assembly will continue to monitor the issues on the ground and provide the necessary information to the commission to guide its work.