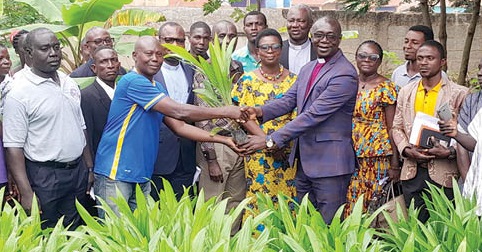 Rev. Dr Seth Kissi (right), Chairman of the Akuapem Presbytery of the Presbyterian Church of Ghana, presenting seedlings to William Antiri Obuobi, one of the beneficiaries. Looking on are some church members
30.5k Shares

The Akyem Asuom congregation of the Presbyterian Church of Ghana (PCG) has distributed 60,000 oil palm seedlings worth GH¢180,000 to 1,000 of its members who own lands for cultivation.

Each of the members was given 60 seedlings.

The initiative is to economically empower the members to generate income to cater for themselves and their dependents.

Presenting the seedlings to the church members at Asuom in the Kwaebibirem District of the Eastern Region last Friday, the Chairman of the Akuapem Presbytery of the PCG, Rev. Dr Seth Kissi, said the church came up with the idea of farming so that members of the congregation interested in farming would be assisted by the church to do so.

He said as a result of the initiative congregants who experienced economic difficulties would be taken out of poverty, adding that it was in such a direction that the church, particularly society would grow.

“We the clergy will be happy if we see members of the congregation moving out of poverty to support themselves and their dependents, the church and society in general,” Rev. Dr Kissi stated.

He said most members of the congregation had arable farmlands suitable for oil palm cultivation that was why the church decided to support them with the oil palm seedlings.

Quoting biblical texts to support the initiative, Rev. Dr Kissi said the Bible stipulated that man should work and derive benefits from neighbours.

Explaining how the oil palm seedlings were acquired, he said that the church had donations from well-to-do individuals from the church and topped it up with another donation from the presbytery to purchase the seedlings.

Rev. Dr Kissi was hopeful that in about four to five years the oil palm plant would start bearing fruits to be harvested.

He said that would afford the farmers the opportunity to harvest the fruits for sale to get money to feed themselves and their families.

“After about four to five years, the oil palm plant will bear fruits for the beneficiary farmers to harvest and sell to get money to start taking care of themselves and dependents,” Rev. Dr Kissi told the church members.

He expressed the hope that the church members would take the opportunity and take good care of the oil palm seedlings after planting to obtain good yields.

Rev. Dr Kissi also advised the beneficiaries against selling the seedlings or just putting them down without planting since that would defeat the purpose for which the seedlings were distributed.

One of the beneficiaries, William Antiri Obuobi, told the Daily Graphic that he had six and a half acres of land on which he would be planting the seedlings.

He advised some church members who had not collected the seedlings to do so since cultivating them would help them a lot and at the same time better their lives in the future.