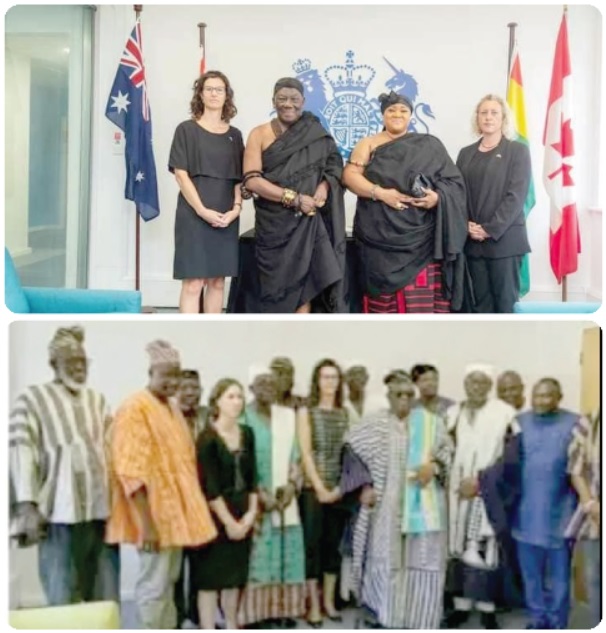 TOP: Daasebre Osei Bonsu II (2nd from left), Mamponghene, and Nana Agyakoma Difie II (2nd from right), the Mamponghemaa, with Harriet Thompson (left), the British High Commissioner, and an official of the commission DOWN: The delegation of the Ya-Na with Harriet Thompson (4th from right), the British High Commissioner
30.5k Shares

Representatives of the Asantehene Otumfuo Osei Tutu II, and the Overlord of Dagbon, Ya-Na Abukari II, have, on behalf of the two eminent traditional rulers, signed the book of condolence opened at the British High Commission in Accra in memory of Queen Elizabeth II.

The Mamponghene, Daasebere Osei Bonsu II, signed on behalf of the Asantehene.

Daasebre Osei Bonsu was accompanied by the Mamponghemaa, Nana Agyakoma Difie II; the Chief of Staff at the Manhyia Palace, Kofi Badu, and other officials of the palace.

After exchanging greetings with the British High Commissioner to Ghana, Harriet Thompson, the Mamponghene proceeded to sign the Book of Condolence.

A letter from the Asantehene expressing his condolences to the British Royal Family was presented through the Chief of Staff to the British High Commissioner to Ghana.

The Dagbon delegation acknowledged the historical relations that existed between the two Kingdoms of Dagbon and the United Kingdom dating back to the colonial era.

The relations led to the drawing of the 1930 Dagbon Constitution which ushered in several development steps designed deliberately towards consolidation of peace and stability in the Dagbon Kingdom.

According to the delegation, the historic relationship that existed between the British and Dagbon influenced the visit to the Dagbon Kingdom in 1961 by Queen Elizabeth when she ascended the throne.

During its rise, the Dagbon Kingdom comprised, at various points, the Northern, Upper West, Upper East and North East regions of present-day Ghana.