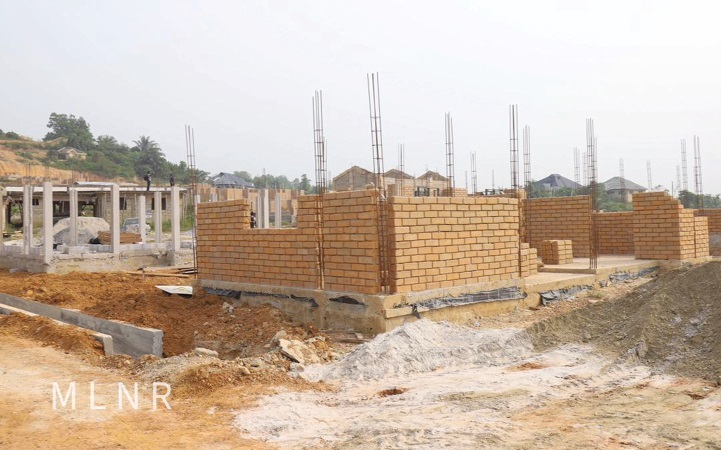 Work on the first phase of the Appiatse reconstruction and development project is 31 per cent complete and will be ready for use by the end of June, this year.

The first phase of the project, which is the core component of the work, involves the reconstruction of 124 housing units.

Out of that number, 106 units are under construction, with some at the foundation and others at the lintel level.

This came to light when the Minister of Lands and Natural Resources, Samuel Abu Jinapor, paid a working visit to the project site yesterday.

An architect who is a member of the Appiatse Reconstruction Implementation committee, Charles Blankson-Hemans, explained that the housing units were being built with compressed earth bricks.

The minister expressed satisfaction at the progress of work so far, and gave an assurance that the needed support would be given to the project implementation team to ensure that it was completed on schedule.

"The vision of President Nana Addo-Dankwa Akufo-Addo is for this community to be reconstructed into a modern Ghanaian community. Having been here to see the extent of work done, I am tremendously impressed and I feel so proud that I have been given the opportunity to lead a team that has brought this reconstruction project to this level," he said.

He added that the displaced indigenes of Appiatse would be resettled properly in settlements that were modern and far advanced with improved facilities and climate-friendly than what they had previously.

Mr Jinapor said he was happy that the funds that had been mobilised from members of the public were being put to good use.

He stressed that the government was determined to get value for money for the project.

"I will also use this opportunity to call on all and sundry to continue to contribute to the fund because this is just phase one of the development,” he said.

He called on people and organisations to take up parts of the project such as school blocks, CHPS compound, market centre and construct them.

The Divisional Chief of Bepoh, Nana Atta Kojo Beremebi II, appealed to the government to support injured persons who were still battling for their lives in the hospital after the explosion.

He said apart from the pain they were going through, some of those people who were breadwinners could no longer provide for their families.

The chief also called on the President to consider supporting the education of their children.