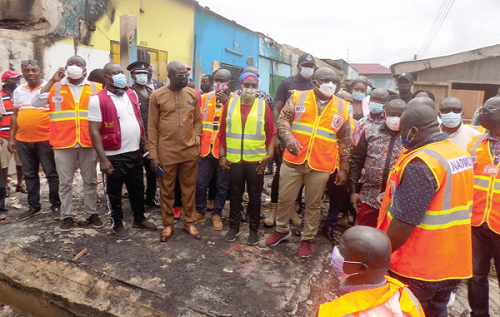 It was an emotional and solemn scene at the Akyem Oda business centre last Wednesday when the Eastern Regional Minister, Mr Seth Kwame Acheampong and his entourage visited the burnt central market.

The team, which included police, military, fire service personnel and officials from the Eastern Regional Directorate of the National Disaster Management Organisation (NADMO), was at the disaster scene to sympathise with victims of a fire outbreak at the central market and to inspect the extent of damage to property.

Before his address, Mr Acheampong had gone round the burnt market and spoken to some of the victims who had assembled their wares at every available space at the Oda business centre including some roads.

The disaster victims wailed uncontrollably, telling the regional minister and his entourage that they had lost all their fortune and capital as a result of the disaster.

They said they would find it extremely difficult to pay back their bank loans, as well as cater for themselves and their children’s education.

Responding to their concerns, Mr Acheampong said the government would do everything possible to find them a temporary place to trade until the burnt market was rebuilt.

He said considering the severity of the damage to the structures, they had to be demolished and the entire market rebuilt.

Mr Acheampong noted with concern that the same market was destroyed by fire exactly 18 years ago. He, therefore, urged the traders to take measures to prevent the recurrence of such disasters with the attendant loss of property.

He gave an assurance that the government would reconstruct the market for them after a fact-finding technical team had submitted its report on the cause of the fire disaster.

Mr Acheampong stressed that when the market was rebuilt, traders who originally occupied the structures would be considered first before attending to new ones.

The MP, Mr Acquah, also assured the traders that a high powered government delegation would visit the destroyed market before the end of the week to assess the extent of damage and offer the needed assistance to rebuild it.

The MCE, Ms Adu, lamented that many patrons of the market from the Eastern and parts of Central and Ashanti regions would be deprived of their livelihoods as a result of the burnt market.

She stressed that she had appealed to the government and non-governmental organisation to help rehabilitate the burnt market for the patrons to get their daily bread.