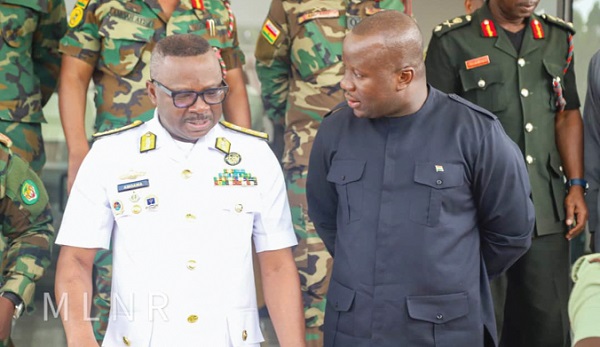 The Minister of Lands and Natural Resources, Samuel Abu Jinapor, has explained that the comment made by President Nana Addo Dankwa Akufo-Addo that Akonta Mining Company Limited was currently not engaged in illegal mining in any forest reserve does not absolve the company of any wrongdoing in the past.

He said that matters to do with Akonta Mining and its activities, its criminalities or otherwise, were being handled by the mandated state institutions and the law would be applied strictly if the company was found culpable.

Mr Jinapor clarified the issue yesterday in response to a question the Daily Graphic put to him on the implications of President Akufo-Addo's comment that raised some controversy about the activities of Akonta Mining Company.

The Media Coalition against Galamsey has been persistent in demanding an investigation and prosecution of the owners and directors of Akonta Mining Company for reportedly mining illegally in a forest reserve.

According to the coalition, there was substantial evidence to prosecute the directors of the mining firm for their alleged engagement in illegal mining in the Tano Nimiri Forest Reserve in the Western Region in contravention of the ban on mining in such reserves.

Also, the Catholic Bishops Conference has made a similar call for Akonta Mining to be investigated.

Akonta Mining Company had been accused of engaging in illegal mining activities in some forest reserves in the country, contrary to the mining laws.

In October last year, four Ghanaians petitioned the Criminal Investigation Department (CID) of the Ghana Police Service to investigate and prosecute Akonta Mining Limited, a mining firm the Ashanti Regional Chairman of the New Patriotic Party (NPP), Bernard Antwi Boasiako (Chairman Wontumi), and others for alleged illegal mining (galamsey) in the Tano Nimiri Forest. The forest lies between the Amenfi West and Aowin municipalities in the Western and the Western North regions respectively.

The petitioners had also said they conducted a search at the Company Registry which confirmed Bernard Boasiako as a director and shareholder and his co-director and co-shareholder as Kwame Antwi.

Prior to this petition, the Lands and Natural Resources Ministry had directed the Forestry Commission to ensure that the company did not carry out any operation in the forest and to take the necessary action against any person found culpable in the matter.

This was after it pronounced all activities being undertaken by the company in the Forest Reserve as illegal.

The coalition had also called on the President to speak to the issue of Akonta Mining Limited.

But addressing the Catholic Bishops at the 16th Biennial Congress of the National Union of Ghana Catholic Diocesan Priests Association in Koforidua in the Eastern Region last Tuesday, President Akufo-Addo said the company was not involved in any illegal mining activities anywhere in the country.

“Let me respond briefly to the chairperson on the issue of illegal mining. I want to assure him and all of you that Akonta Mining is not engaged in any illegal activities in any part of the country as we speak.

“Further, the Ministry of Lands and Natural Resources has, through the Forestry Commission and with the assistance of the military, cordoned off all 294 sites of forest reserves in the country and rid them of illegal mining as we speak,” President Akufo-Addo added.

The President’s remarks have engendered mixed reactions and interpretations.

While others were of the view that the President had prejudiced the ongoing investigations on the mining company, another group contends that the President’s statement had nothing to do with absolving the company from blame and as at the time that he was speaking, Akonta Mining was not involved in any activity in any forest reserve.

The Lands and Natural Resources Minister maintained that the President’s response to the Catholic Bishops’ could not absolve the company of any crime.

"The President's statement cannot absolve the company of any crime, neither can it interfere with any investigations being carried out by the Ghana Police Service and the Office of the Special Prosecutor," he stressed.

He added that as an astute lawyer, the President would not make such statements, especially so when he was committed to fighting galamsey.

"The President was responding to a request by the Chairman of the Catholic Diocesan Peace Association Biennial Conference, Dr Kenneth Ashigbey, who in his remarks, called on the President to speak to the issue of Akonta Mining.

“So, the President sought to respond and assure the conference and for that matter, the country, that as of the time he was speaking on Tuesday, January 4, Akonta Mining was not engaged in any illegal mining activities in any forest reserve in the country.

"Indeed, the President went further to assure the country that under his instruction, the Ministry of Lands and Natural Resources and the Forestry Commission had cordoned off the 294 forest reserves in the country, but for some reason, that statement has been taken out of the discourse," he said.

Mr Jinapor spoke to the Daily Graphic after he had paid a courtesy call on the Chief of the Defence Staff (CDS), Vice Admiral Seth Amoama, to discuss the raft of measures that had been implemented to fight illegal mining and the way forward in dealing with the menace.

The minister was accompanied by the Deputy Minister of Lands and Natural Resources in charge of Forestry and Lands, Benito Owusu-Bio, and the Chief Executive Officer (CEO) of the Minerals Commission, Martin Ayisi.

For his part, Vice Admiral Amoama said the Military High Command had committed to continue to pursue the measures that had been rolled out to make sure that the galamsey menace was dealt with.

The CDS said the frequent engagement initiated by the Ministry with the Ghana Armed Forces was a good step towards winning the fight against the menace.

He assured the minister that the military was committed to the fight against illegal mining and remained resolute to offer support in dealing with the menace.