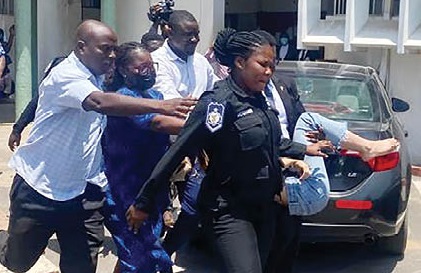 Jong Li Hua, one of the suspects who collapsed in the courtroom being carried away
30.5k Shares

Proceedings at the court yesterday were not without drama, as one of the suspects charged along with Aisha, Jong Li Hua, collapsed in the course of the hearing.

Ms Huang, who has a second passport bearing the name Huang Ruixia, was arrested through a National Security operation after she reportedly returned to the country to undertake the illegal mining activity.

She is currently facing criminal charges, along with three others, at the Circuit Court.

The three have also pleaded not guilty to the sale of mining equipment without licence.

Counsel for the accused, Nkrabea Effah-Dartey, in his bail application, described the charges as minor and wondered why, after 14 days of Aisha’s remand, the police had not been able to complete their investigations.

He accused the media of laying too much emphasis on what he described as “a small case”, indicating that his clients had people of good substance to stand as sureties for them.

“As Aisha stands here, she cannot tell the court how she got into the country,” the prosecutor added.

He clarified that the accused were charged with criminal offences, and that they were not before the court by virtue of their nationality or colour.

He prayed the court to remand the accused persons into police custody and assured it that their counsel would have access to them anytime he wished to.

In his ruling, Mr Acquah said Aisha was a well-known galamsey operator who had gained notoriety.

“The accused may not appear to stand trial and may interfere with evidence and hamper trial,” he said.

The judge, subsequently, remanded the accused into police custody.

They are to reappear before the court on September 27.

The facts before the court are that Ms Huang was first arrested in December 2017 for a similar offence but managed to sneak out of the country to avert prosecution.

According to the prosecution, early this year, Aisha sneaked back into the country after changing the details in her Chinese passport.

“Aisha again resumed small-scale mining activities without licence, and together with her accomplices, engaged in the purchase and sale of minerals in Accra without valid authority granted, as required by the Minerals and Mining Act,” he added.

He further said Aisha returned to China and changed her identity, only to come back to Ghana to commit the same crime for which she had escaped prosecution earlier.

The three others with her, according to the prosecutor, sold mining equipment and dealt in gold in Accra, without a valid licence.