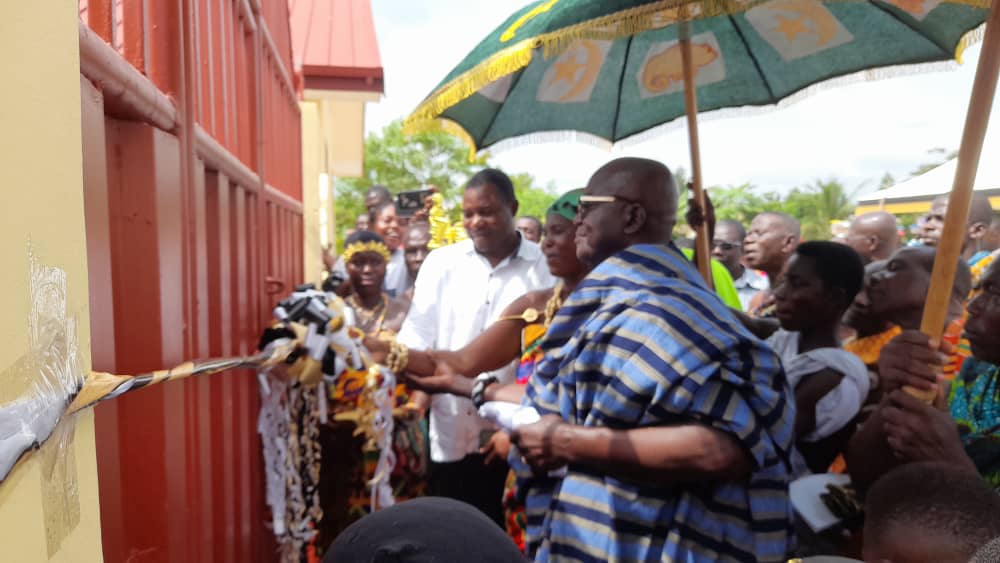 It has also handed over mechanised boreholes for the people of New Bidiem and Baakoyeden in Obuasi and Wioso in the Adansi North District of Ashanti.

The projects formed part of the aim of the Trust Fund at improving education and sanitation in Obuasi and its surrounding areas.

The AGA Trust Fund was launched in 2012 as per the stability agreement between the mining firm and the Government of Ghana. As part of the revised agreement in 2018, the mine pledged to contribute $ 2 of each ounce of gold produced into the Trust Fund to develop communities within it's catchment area.

The newly commissioned two-unit KG blocks which cost GHS10,76,239.28 have two fully-furnished classrooms with tables and chairs for both pupils and teachers, one multipurpose hall, an office for the headmaster, a kitchen and store room. They also have separate washroom facilities for both male and female pupils and staff and a mechanised borehole to ensure constant supply of water.

The second project which is mechanised boreholes with overhead concrete stands for the other three communities cost GHS 210,494.23.

At the commissioning ceremony at Dokyiwa, a board member of the AGA OCTF, Nana Boakye Yiadom II, said the Trust Fund decided to invest in the construction of the KG blocks because it believed in how critical education at the foundation level was.

"The AGA OCTF is well aware of how crucial Kindergarten education is in the educational development of children hence, we decided to construct the two blocks for Binsere and Dokyiwaa to have more of the children in school at that level," he said.

He appealed to the beneficiary communities and the schools to protect and maintain the facilities to stand the test of time.

The Municipal Chief Executive for Obuasi, Elijah Adansi-Bonah, who also chairs the Steering committee of the AGA Obuasi Community Trust Fund, challenged the Fund to consider investing in areas that could create more jobs for the people of Obuasi.

He said, he was convinced that returns in creating jobs for the people could be reinvested into the Fund.

Mr Adansi-Bonah further appealed to the people of Obuasi to support Anglogold Ashanti to enable it to produce optimally, and maximise profit in order to pay more into the Trust fund.

The Senior Manager Sustainability, AGA, Emmanuel Baidoo, announced that the mining firm has so far deposited a total of GHS 6.6 million into the Trust Fund, a move he said was in fulfilment of the Agreement it had with the Government.

The Queenmother of Dompoase Traditional area, Nana Afia Afrifa Tokudwom III, lauded the Trust Fund for investing heavily into education since its establishment about a decade ago.

She called on parents to prioritise their children's education by investing in them.

The Obuasi Municipal Director of Education, George Alfred Koomson, said research has shown that the school's environment had a role to play in the development of the child.

He, commended AGA for creating educational friendly environment attached to the KG blocks to aid the children's education.