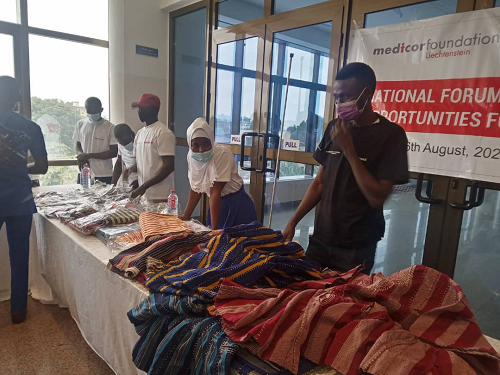 ActionAid Ghana, a non-governmental organisation has provided livelihood skills as well as logistical support for more than 500 youth across the country to enable them set up their own businesses.

The beneficiaries were selected from four districts— Asutifi North, Mion, Sagnarigu and Talensi in the Northern, Upper East and the Brong Ahafo Regions respectively.

The NGO engaged the beneficiaries through its project dubbed: “Providing Employment Opportunities for Young People in Ghana.”

The project, which is being funded by the Medicor Foundation, is aimed at equipping young people in the beneficiary districts to acquire various vocational skills to wean them from unemployment.

Speaking at a National Youth Forum in Accra on Thursday, August 26, 2021, the Head of Programmes, Campaigns and Innovations at ActionAid, Mr John Nkaw, said ActionAid over the years has been a key player in providing employment opportunities for many Ghanaian youth.

He said young people are the future leaders, hence the need to ensure that their development is prioritised at all levels.

For him, despite the looming security threat that youth unemployment poses to the country, the employment structure of the Ghanaian economy has not changed much from several decades ago.

Mr Nkaw said various reports have expressed concern about the growing unemployment menace in Ghana, pointing out that the situation needed to be addressed urgently.

He said, for instance that, in 2016, the World Bank projected that given Ghana's growing youth population, 300,000 new jobs needed to be created each year to absorb the increasing numbers of unemployed young people.

For him, “Many young people in Ghana struggle to find employment, which makes it impossible for them to provide for their basic needs.”

He added that many youth also lack skills, knowledge, and training to start, build, and manage sustainable income generating activities as well as their chances of reaching their full potentials.

According to Mr Nkaw, ActionAid “as an organisation that has been operating since 1990 in Ghana and fighting gender inequality, root causes of poverty and promoting social justice, ActionAid is working with young people to contribute to change stories, by empowering them with relevant skills and knowledge in livelihood activities and encouraging their participation in decision making that affects their lives.”

In addition, he noted, ActionAid would continue to prioritise the interest of the youth in its activities, pledging that “At Action, we recognise that the pathways to change and development are determined by creative individuals and collective actions that address the underlying cause of poverty.”

He stressed the need to involve young people in nation building activities, saying “We have consistently been mindful that the direct involvement of young people in our community programmes, will help equip them with the capacities to initiate campaign agenda and strategies about their own development.”

Mr Nkaw noted that ActionAid as part of its efforts in getting the youth involved in nation building activities has resulted in the establishment of an ActionAid youth wing- Young Urban Women Movement and Activista, a community centered movement that is empowering the youth to participate in discourses and decision making processes that affect their lives locally and internationally.

The programme brought together many young people from across the country as well as many youth-centered institutions to deliberate on issues affecting youth development in the country.

Some of the participants and beneficiaries of the programme used the occasion to exhibit some of their wares, including smock, kente, detergents, foot wears, and beads products.

The Project Manager, Terence Tienaah, said the project targeted 531 young people (362 females and 169 males) who were selected with the support of key stakeholder institutions such as (Ghana Enterprises Agency (GEA) formerly National Board for Small Scale Industries- NBSSI and National Vocational and Technical Institutes).

She explained that beneficiaries were given the opportunity to assess various economically viable trades before selecting their preferred vocational skills training, noting that in all, 12 different trade areas, including catering, soap making, and tiling were selected.

She added that the NGO had already held three regional forums at the various implementing regions where the youth engaged stakeholders on youth related policies and government flagship programmes.

The Acting Director of the Youth Employment Authority, Nelson Owusu Ansah in his brief remarks encouraged Ghanaian youth to take interest in personal development by acquiring skills that could earn them their daily bread.

He said there is nothing like green pastures anywhere and that any determined person will make it in life, depending on efforts they put into their own lives.
He said technical and vocational training presented a great opportunity that the country could leverage on to solve its unemployment menace.