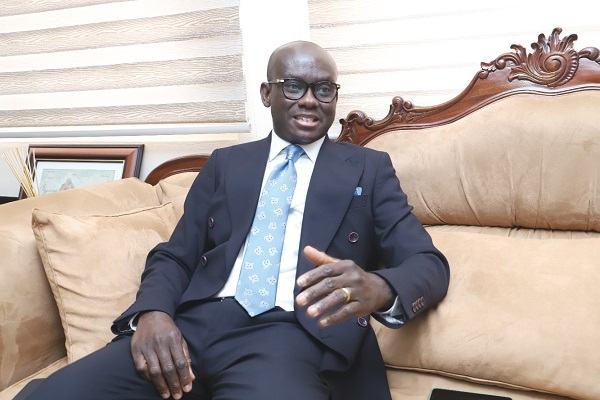 Companies that under-declare their incomes and also use other dubious means to evade taxes will face the full rigours of the law, the Attorney-General (A-G) and Minister of Justice, Godfred Yeboah Dame, has warned.

In an exclusive interview with the Daily Graphic last Tuesday, he said tax evasion, avoidance and under-declaration of income were pervasive in the country, a situation that robbed the state of crucial revenue for development.

“I think we have a tax evasion problem as a country. Our system of monitoring and even the manner in which accounting is done and how businesses are not captured within the tax net lead itself to tax evasion,” Mr Dame said.

He mentioned the legal profession as one industry that was a big culprit of tax evasion, adding that some lawyers collected all sorts of fees without paying taxes on them.

While encouraging lawyers to be good citizens and pay taxes in line with their oath, the A-G said his office would not hesitate to prosecute any lawyer found wanting for evading tax.

Mr Dame said his outfit was collaborating with the Ghana Revenue Authority (GRA) and other agencies to ensure that companies that short-changed the country in the payment of taxes were legally made to honour their tax obligations.

The collaboration, he explained, involved the A-G’s Department reviewing and examining tax cases from the GRA, as well as giving legal support to help the GRA effectively discharge its mandate.

The Attorney-General said it was such multi-sectoral collaboration that led to the Chief Justice establishing a special tax court to help in the speedy adjudication of tax cases.

Already, he said, such collaborations had led to the retrieval of hundreds of millions of dollars in taxes from non-tax compliant companies, especially those in the extractive sector.

“We are already prosecuting such entities and very soon we will prosecute other companies no matter how big they are. It is up to the companies to either pay or face prosecution,” he said.

Mr Dame explained that when tax assessments were made, usually companies were given time to pay.

“If they do not pay, we will have recourse under the tax and criminal laws of the country to ensure recovery of the money,” the A-G pointed out.

The comments by the principal legal advisor to the government come on the back of a recent spat between the GRA and some multilateral companies over the issue of payment of taxes.

On January 11, this year the GRA slapped telecommunication giant, MTN with a GH¢8.21 billion tax liability. The assessment includes penalties and interest charges.

The tax assessment followed an audit by GRA on MTN Ghana for the period 2014-2018, using a third-party consultant as well as a new methodology based on call data records (CDR), recharges and other data.

The audit, which commenced in 2019, had the objective to give assurance on the reliability and completeness of revenues declared by MTN Ghana for the purpose of tax computation for the period 2014 to 2018.

In its response, the telecommunication company challenged the assessment by the GRA, saying that it was a tax compliant citizen with absolute commitment to transparency and good corporate governance.

"MTN strongly disputes the accuracy and basis of the Assessment, including the methodology used in conducting the audit,” the company said in a press release on January 13.

In a rebuttal, the GRA has disputed the assertions by MTN and explained that the tax assessment was based on due process, transparency and fairness.

“GRA followed due process in serving a Notice of Assessment and has engaged MTN Ghana as required by Law to ensure that it communicates the basis of assessment as well as the several avenues available for objection as required in Section 42 of the Revenue Administration Act,” the revenue administration body said.

In October last year, the GRA announced that 48 business entities across the country were being prosecuted for allegedly evading taxes and failing to issue Value Added Tax (VAT) invoices on purchase of goods and services.

Per Section 80 of the Revenue Administration Act 2016 (Act 915), an entity supposed to pay tax but fails to pay tax commits an offence and is liable on summary conviction.

The punishment for such an offence is a fine of up to GHC24,000 and to a year of imprisonment of up to a year.

The GRA has recently been emboldened in its tax assessments mandate following a Supreme Court decision which affirmed a legal provision that makes it mandatory for taxpayers dissatisfied with a tax assessment by the GRA to pay 30 per cent of the tax before challenging its legality.

In a unanimous decision on November 30, last year, the seven-member panel of the apex court dismissed a suit filed by one Richard Amo-Hene challenging the constitutionality of the said law.

Known as the “pay now, argue later” rule, Section 42(5) (b) of the Revenue Administration Act, 2016 (Act 915) stipulates that before a taxpayer can challenge a tax assessment by the GRA, the person must pay at least 30 per cent of the tax in dispute.

It specifically states that “an objection against a tax decision shall not be entertained unless the person has in the case of other taxes, paid all outstanding taxes including 30 per cent of the tax in dispute.”

What this means is that the GRA will not hear any appeal challenging its decision for an entity to pay tax unless that entity had first paid at least 30 per cent of the taxes as stipulated under Section 42(5) (b) of Act 915.