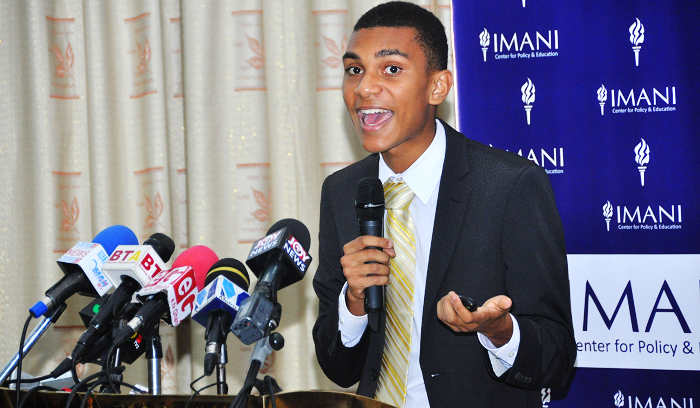 Seventy-five per cent of the promises made by six political parties are not feasible because they cannot be quantified, policy think tank IMANI Ghana has concluded.

Principal among the promises is the New Patriotic Party (NPP’s) one district, one factory promise and creating a new region out of the Western Region.

It said out of the 20 promises made by the governing National Democratic Congress (NDC), six were deemed to be realistic and attainable.

These were part of research findings presented by IMANI Ghana at a programme in Accra today to assess the promises of the political parties whose candidates were on the campaign trail. It covered the period June to August this year.

Data for the report were collected from available manifestoes of the parties, the Institute of Economic Affairs (IEA) dialogues, interviews,  publications in the media and the official websites of the parties.

The report was based on parameters such as education, the economy, infrastructure, governance and social policies.

The report further indicated that out of 247 promises that were made by the political parties within the period of study, 186 were not quantifiable, 43 were quite feasible, while a paltry 18 were very feasible.

It said three out of every four promises so far made by the political parties were almost empty and could not be assessed.

The report noted for instance that the one district, one factory campaign promise made by the flag bearer of the New Patriotic Party (NPP), Nana Addo Dankwa Akufo-Addo, was not feasible because it could not be quantified.

According to IMANI Ghana, out of 49 promises made by the Progressive People’s Party (PPP), only three of them were measurable and attainable.

One of the PPP promises IMANI found to be unrealistic was the free education policy from primary to the SHS level.

Out of the CPP's 38 promises, only four were deemed to be measurable and attainable.

For the NPP, only one out of the 29 policies was found to be realistic, citing the NPP promise to revive a collapsed NHIS as vague.

On the NDP, IMANI said the party spent quality time complaining about the various sectors without its leader stating the plan of action to resolve them

Out of 45 NDP promises assessed, only four were deemed to be measurable and attainable.

"It is clear that the vast majority of the promises that the party presents are not assessable. They are almost empty promises. A lot of issues arise from this," Stephan Reppen, a researcher at IMANI, said.

One of the researchers, Mr Andrew Ntim, observed that the public deserved to have detailed information on the policies the political parties espoused but added that it was only possible when politicians provided realistic and measurable policies.

“Political parties and politicians make promises on these critical indicators without giving details of their feasibility. They also fail to assign the cost element so that the public will be informed on how many resources will be used. We must begin to interrogate some of these policies as citizens,” he stressed.

The Chief Executive Officer (CEO) of IMANI Ghana, Mr Franklin Cudjoe, observed that while political parties and politicians were tempted to make promises on campaign platforms, the onus was on them to think through those promises to see how feasible they were.

“In the 2012 election, the NDC alone made 541 promises. The party said it would establish 200 SHSs across the country. As we sit here, that has not been done. Let us get involved and ask the questions that matter for our politicians to sit up.

“We have a social contract with elected politicians and so we must hold them responsible and stop the business of allowing politicians to say what they like and get away with it,” he said.

Another member of the research team, Mr Hubert Nii Amponsah, criticised the free SHS policy espoused by the NDC and the NPP, saying that while the NDC failed to give a comprehensive definition of what the concept entailed, the NPP did not provide details on how much it would cost.

He said that posture by political parties created room for corruption, since the citizens could not find any quantifiable and realistic grounds to demand accountability from them.

Mr Amponsah stressed the need for political parties to present manifestoes that detailed the cost analysis of the policies they espoused.

“If we do not have quantifiable promises that can be subjected to scrutiny, governments will continue to change but we will not see any development,” he said.

He urged the electorate to demand accountability from politicians on their promises before deciding on which direction to cast their vote.