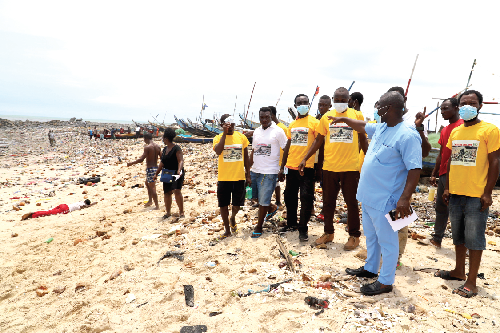 Mr Raymond Ntoana Tettey (hand raised), Chairman of the Ashiedu Keteke Sub-Metro, explaining a point to the community champions about the situation at the beach after the ceremony. Picture: GABRIEL AHIABOR

The Water Research Institute of the Council for Scientific and Industrial Research (CSIR-WRI) has introduced an innovative way of collecting ocean plastic in three fishing communities in the Greater Accra Region for recycling.

The pilot project, dubbed: “Clean ocean: Protecting marine life”, is being sponsored by UNESCO and implemented by the CSIR-WRI, in collaboration with Zoomlion Ghana Limited and the local authorities in the beneficiary communities of  La, James Town and Teshie, for the next three months.

In line with this, 10 residents of each of the three fishing communities have been assigned the responsibility, as community champions, to lead in the collection of sea-tossed plastic waste on a daily basis.

At a community durbar to launch the project in James Town yesterday, a  principal research scientist of the CSIR-WRI, Dr Kwadwo Ansong-Asante, said the increasing amount of marine plastic waste posed a challenge to marine life and fishing activities.

He said the exercise would focus on the collection of plastic tossed from the sea and deposited along beaches and coastal areas.

He said the exercise would begin from 6 a.m. to 6 p.m. each day, with waste bins provided by Zoomlion for onward transfer to the CSIR for recycling and transformation into pavement bricks and other plastic items.

Dr Ansong-Asante explained that the objective of the project was to clean the ocean and, therefore, urged residents of benefiting communities to actively participate in the project.

A Principal Research Scientist, Dr Ruby Asmah, said when fishes ate plastic, it got lodged in their system, with the resultant effect on their health.

“As community members, we can play our roles better by not disposing of waste indiscriminately,” he said.

For his part, the Greater Regional Director of Zoomlion, Mr Mogan Acquah, said the company was providing 240 plastic waste bins for the exercise.

The fund for the project was awarded to the CSIR-WRI through Dr Pennante Bruce-Vanderpuije an early Carrier Research Scientist with the CSIR-WRI.