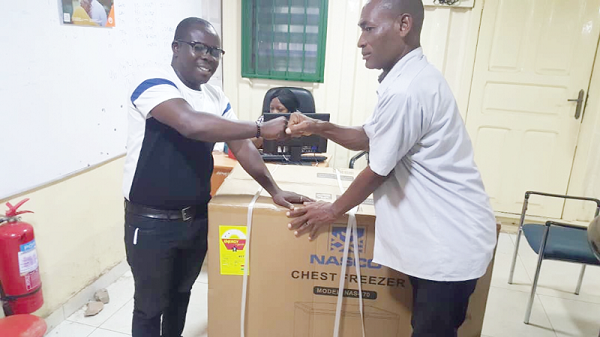 Mr Abdul Rahman Abdullah, Ayawaso East Municipal Engineer, presenting a fridge to one of the beneficiaries of the Disability Fund Follow @Graphicgh

Anthony Adarkwa of Accra benefited from the Disability Fund in 2016 when he was given GH¢1,000 to support his trading activities and GH¢3,000 in 2019 to buy a tricycle.

For Gilbert Asamoah Ayebeng, a teacher in the La Dadekotopon municipality in the Greater Accra Region, the fund had helped him to climb the academic ladder to earn decent jobs.

Now a holder of a Master’s degree, Mr Ayebeng accessed the fund to pay his fees while in the senior high school in 2012.

Nonetheless, 15 years after the establishment of the fund, narratives on its impact on the lives of persons with disability (PWDs) in the country have revealed a mixed bag of the good, the bad and the ugly.

The disability community has raised eyebrows about the general management of the fund, which members say has prevented the social intervention programme from reaching its full potential.

While many PWDs saw the fund as a lifesaver in principle, they were worried about some developments that were eroding the gains and robbing them of their pearls.

A survey by the Daily Graphic in four regions showed that, generally, many PWDs believe that in spite of the number of lives the fund has impacted, all was not well with its management, which calls for a serious re-look.

Some beneficiaries of the programme in the four regions — Greater Accra, Ashanti, Central and Northern — who spoke to the Daily Graphic, said though the fund had impacted positively on their lives in the areas of education, health care, income-generation activities, and improved their social status, delays in releasing the fund, political interference, lack of transparency and insufficient funds, among others, were key challenges hindering the effective utilisation of the fund.

The PWD Act, 2006 (Act 715) set up the Disability Fund which requires that two per cent of the District Assemblies Common Fund (DACF) be set aside for PWDs to minimise poverty among them and enhance their social image through dignified livelihoods.

Article 41 of Act 715 provides for the establishment of the National Council on Persons with Disability (NCPD), a body that will evolve policies and strategies to enhance PWDs participation in mainstream national development.

The NCPD, in collaboration with the Ghana Federation of Disability Organisations (GFD), and in cooperation with the Ministry of Employment and Labour Relations, as well as the Ministry of Local Government, Decentralisation and Rural Development, came up with guidelines for the disbursement and management of the DACF for PWDs in 2010.

Rule four of the guidelines mandates each metropolitan, municipal and district assembly (MMDA) to form a special committee called the Disability Fund Management Committee (DFMC) to oversee the disbursement of the fund to beneficiaries.

Rule five of the guidelines spells out the areas the fund could be used to support PWDs. The areas are advocacy, educational support, provision of technical aids, income-generating activities and training on employable skills.

According to Gilbert Asamoah Ayebeng, although the fund was supposed to be a lifesaver for PWDs, it was extremely difficult to access.

In 2018, the DACF Administrator gave a directive that instead of the old practice where physical cash was doled out directly to beneficiaries to buy items themselves, the MMDAs should rather do the purchase.

After four years of implementation, the PWDs are raising concerns over alleged procurement irregularities that make them lose out on the fund.

The President of GFD in the Greater Accra Region, Mr Abdul Razak Yusif, said in terms of support for income-generating activities, the impact of the fund had not been as great as expected.

Also the Head of the Social Welfare Unit of the Ayawaso West Municipal Assembly, said reports he had received across the 29 assemblies in the region showed that the fund had been the straw many PWDs held on to for accomplishing their dreams in education, medical care and economic empowerment.

Mr Yusif, however, said in terms of support for income-generating activities, the impact had not been that great.

"They do not get the money they need for their businesses because the fund is not enough to meet their needs. The disability fund account at the MMDAs is credited with between GH¢20,000 and GH¢60,000 every quarter.

“After taking out five per cent administrative expenditure, what is left is woefully inadequate to meet the needs of the numerous PWDs,” Mr Yusif said.

He asserted that political interference, purchase of substandard but overpriced items for PWDs and delays in releasing the fund were some of the bottlenecks associated with the management of the fund.

The Regional President of GFD, Nana George Frimpong, said apart from scholarships given to many PWDs for education from the basic to tertiary level, modest investments had also been made in upgrading infrastructure for special education in the region.

In the Cape Coast municipality, for instance, he said, part of the fund had been released to upgrade the school building and build a library for the Cape Coast School for the Deaf.

He added that the GFD had special arrangements with the Ghana Education Service (GES) in the Cape Coast metropolis where the federation provided funding support to the GES to help identify PWDs, diagnose their nature of disability and place them in special education units.

Nana Frimpong said through the disability fund, the Central Region GFD had been able to embark on capacity building and organisational development programmes for all its members in the MMDAs.

Furthermore, he indicated that through such capacity-building programmes, many disability groups including the Ghana Society of the Physically Disabled (GSPD), the Ghana Blind Union (GBU) and the Ghana National Association of the Deaf (GNAD) had undertaken a number of income-generating projects to ensure sustainable livelihoods.

The President of the Northern Region chapter of GFD, Mr Mohammed Iddrisu, told the Daily Graphic that although the Disability Fund had been beneficial to PWDs, there was more room for improvement.

"The money that is given out to our people as start-up is too small. Some of them are given just GH¢200 as start-up and this is not motivating enough,” he said.

He was of the view that since the fund was meant for PWDs, they must be given enough space to manage it.

A visually impaired person, Mr Alfred Tabi Amponsah, who is the Ashanti Regional GFD President, said he benefited from the fund to continue his education.

Touching on the challenges, he alleged that political interference had plagued the disbursement of the fund and deprived some PWDs the opportunity to benefit from it.

"The guidelines require PWDs to present their applications to the Fund Management Committee at the MMDAs to vet, do needs assessment and allocate the fund, using laid down procedure. But, sometimes, Members of Parliament (MPs) and other politicians come with a list of people to be given the money without going through the process, and you cannot do anything about it," he said.

Mr Amponsah also raised concerns about the purchase of inferior items for PWDs, delay in the release of the Disability Fund to the MMDAs and lack of transparency in the management of the fund.

When reached for his reaction, the Chairman of the Disability Council Board, Mr Yaw Ofori Debrah, told the Daily Graphic that there were many blessings to be counted, just as there were a myriad of challenges that needed to be dealt with regarding the fund.

However, he insisted that the impact of the Disability Fund could have been better if the guidelines for disbursement and management of the money were religiously adhered to.

Mr Debrah said one of the initial challenges the NCPD had to deal with was the misapplication of the fund.

On the lack of transparency in the management of the fund, he said PWDs lacked adequate information on the allocations and disbursements made from the fund account.

The National President of GFD, Ms Mawunyo Kuma Yakor-Dagbah, said although there were challenges, the Disability Fund had largely been the little forest that saved PWDs.

Responding to specific issues that had been raised by some PWDs about the management of the fund, she said the GFD had taken steps to address some challenges.

For instance, Ms Yakor-Dagbah said in the revised guidelines for disbursing the fund, MMDAs were required to publish allocations to the fund on their noticeboards to deepen accountability.

Again, she said, when approved, the new guidelines would also ensure that PWDs had two representatives on the Fund Management Committee at the MMDAs.

Responding to concerns about delays in the release of the funds and the call for an increment from the current three per cent, Ms Yakor-Dagbah said those concerns were justifiable.

As of 2021, the World Health Organisation (WHO) had established that there were more than one billion PWDs in the world, 20 per cent of whom lived with great functional difficulties in their daily lives.

The global health body also estimates that 253 million people, representing 3.2 per cent of the world population, were affected by some form of blindness and visual impairment.

According to the WHO, 80 per cent of PWDs lived in developing countries, including sub-Saharan Africa.