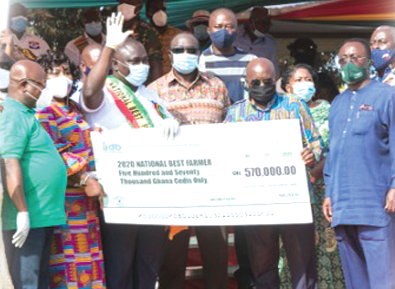 A fifty-year-old livestock and multi-crop farmer from the Jomoro District in the Western Region, Mr Solomon Kojo Kusi, has emerged the 2020 National Best Farmer.

"It started as a hobby 10 years ago and later developed into a passion and then business and now here I am with the ultimate National Best Farmer Award," an elated Mr Kusi told the Daily Graphic in an exclusive interview on the occasion of the 36th National Farmers Day held in Techiman in the Bono East Region yesterday.

The proud award winner, who is a secondary school leaver, beamed with smiles as his achievements in farming were announced.
When he was called to step forward for his award, a smiling proud receipient walked gracefully to the dais to receive his prize; a sash and a cheque for GH¢570,000, which is the equivalent of $100,000 - a sponsorship from the Agricultural Development Bank (ADB).

President Nana Addo Dankwa Akufo-Addo decorated Mr Kusi with the sash with the help of the Minister of Food and Agriculture, Dr Owusu Afriyie Akoto; the Minister of Fisheries and Aquaculture Development, Mrs Elizabeth Afoley Quaye, and the Managing Director of ADB, Dr John Kofi Mensah. He also presented the 2020 National Best Farmer with his cheque, after which the 2019 National Best Farmer, Mr Charles Gyamfi, handed over the sword of office to the award winner.

The 2020 National Best Farmer and father of nine told the Daily Graphic that he had never regretted quitting his job as a taxi driver to go into buying and selling rice, and engaging in farming.

Asked if he ever dreamt of becoming the National Best Farmer one day, Mr Kusi said: "I challenged myself in 2012 to get to this level and I have never looked back ever since but worked hard towards achieving this goal."

A citation accompanying his award commended him for cultivating crops and rearing animals in agreement with the principles of integrated farming operations.

“The leftovers of his crop harvests are used in feeding his animals," the citation read, adding that "the maize is used to feed the poultry birds and cassava peels used as supplementary feed for the turtles, sheep and goats.”

Mr Kusi has been farming since 2010 and currently has a total workforce of 225, that comprises 105 full-time workers and 120 casual workers.

The First Runner-Up to the National Best Farmer was Nana Kofi Drobo IV from Wenchi in the Bono Region, with Alhaji Mahamoud Mohammed Awal, from the Northern Region as the Second Runner-Up.

They each received a tractor with ploughing accessories and a double-cabin Nissan pickup and other items, as well as certificates as their prizes.

On the occasion, a total of 135 farmers and fishers were rewarded at both the national and regional levels.

All the regional best farmers received tricycles and other items as their prizes.

The 36th National Farmers Day attracted a large crowd of people from all walks of life. They included farmers, agri-business executives, bankers, input dealers, the diplomatic corps, ministers of state and the President, Nana Addo Dankwa Akufo-Addo, who graced the occasion as Guest of Honour.

Even though the National Farmers Day coincided with the Market Day in Techiman, the central business district of the municipality which plays host to one of the country’s biggest markets, went quiet as most traders abandoned their wares and trooped to the durbar grounds located close to the market to observe the proceedings.

Sounds of fontomfrom, atumpan and various traditional drums filled the air, as chiefs and their retinue dressed in special traditional Kente cloths, sat under beautifully coloured umbrellas to bring a traditional touch to the occasion.

Yesterday’s colourful event which was interspersed with cultural performances was the climax of a five-day line-up of activities marking the National Farmers Day celebration which was on the theme: “Ensuring Agribusiness under COVID-19 - Opportunities and Challenges.”

Mr Kusi described rubber cultivation, his mainstay, as "cocaine in the bush".

He advised tertiary school graduates to venture into farming as a business instead of looking up to the government to provide them with non-existent jobs.