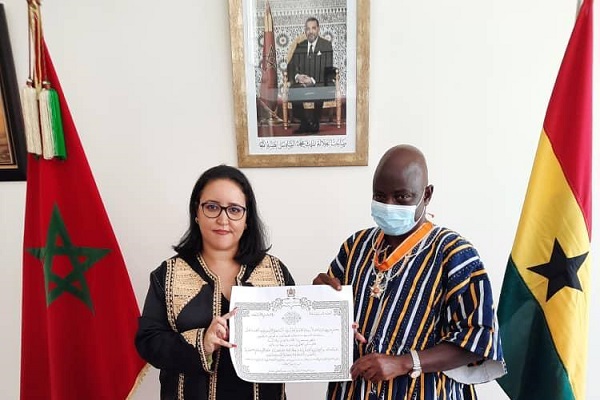 Mr Yakubu was honoured with the award at a short ceremony last Friday at the residence of the Moroccan Ambassador to Ghana, H.E. Mrs Imane Ouaadil, on behalf of behalf of King Mohammed VI.

Honouring the Ghanaian diplomat with the award, the Moroccan Ambassador described Mr Yakubu as a hardworking personality whose tenure as ambassador strengthened the bond between the two countries.

In a short speech read at the ceremony, Mrs Ouaadil expressed humility in having the honour to give the award to the Mr Yakubu, currently the Upper East Regional Minister, on behalf of King Mohammed VI.

“I’m extremely honoured and humbled to award the Alawite Wissam of the Order of Commander to His Excellency Stephen Yakubu on behalf of his Royal Majesty King Mohammed VI. This decoration is one of the most prestigious royal decorations in the Kingdom of Morocco awarded to foreign dignitaries,” she said.

The award, according to Mrs Imane, is a symbolic message of the significance of the relationship that exist between Ghana and Morocco and the how he duly executed his duties diligently during his tenure as Ghana's envoy in Morocco.

“Indeed, during his term in Morocco, Ambassador Yakubu dedicated his rich experience to the development and diversification of the excellent relations between the two countries.

“He initiated several actions in the political and economic fields, gaining the trust, respect and friendship of countless Moroccans as well as his peers at the diplomatic corps,” she added.

Mr Yakubu was among 22 other distinguished Ghanaians who were appointed in 2017 by President Nana Addo Dankwa Akufo-Addo to head various Ghanaian missions in the world.

The Alawite Wissam Award is an embodiment of trust and respect that is bestowed on diplomats by the King of Morocco.