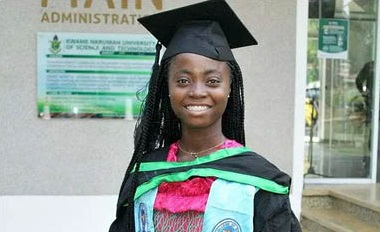 Now 18-year-old Ruth Gyan-Darkwa has been offered the opportunity to pursue a master’s programme in Computer and Optical (Fibre Optics) Engineering with the chance of being offered the chance to also pursue a PhD programme if she is able to meet the academic cut.

However, she is stranded in Accra as she has not been able to raise the fees of $46,000 required for her to start her programme.

Her inability to raise the fees, a requirement for a visa application, has also affected her successful chance to get the visa to enable her to travel.

For now, she has begun her course online, but Ms Gyan-Darkwa could have the admission revoked if she is unable to raise her fees by the end of the first semester.

While she explores means of raising the money, her father Kwadwo Gyan-Darkwa, a tutor at a senior high school in Kumasi, told the Daily Graphic that the Minister of Education, Dr Yaw Osei Adutwum had promised during a media interview that she was a ‘gifted student’ and would encourage and support her to pursue a master’s and PhD programme as it fell within the great plan of the Science, Technology, Engineering and Mathematics (STEM).

He, however, said when they contacted him after his daughter gained admission, he rather advised them to seek admission at a school in either the United Kingdom, Australia or Canada as those were the countries that government scholarships usually covered.

“Unfortunately, it was late for her to seek admission in a university in those countries, Dr Adutwum suggested.

Reacting, however, Dr Adutwum said while he wanted to help the young woman given her potential, he could not circumvent the process and, thus, advised the father to encourage her to seek admission at a school where government scholarship covered.

“At the moment, what I know is that government scholarship covers schools in the UK, Australia & Canada as the fees there are relatively cheaper than the US.

“Yes, I said that I would help her and that promise still holds. Obviously, the support will not come from my personal resources, but I’ll use my office to do what I can to help her if she gains admission to a university in the countries the government scholarship covers.

“I already told them that when they came to my office,” Dr Adutwum maintained when the Daily Graphic contacted him on the issue.

However, Mr Gyan-Darkwa, in a reaction, said his daughter had already accepted the offer from New Mexico University and efforts to get support from other sources had not been successful because they were always referred to the promise made by the minister.

“The admission has already been offered and it is late to decline and go look for another admission elsewhere. We cannot disappoint her.

“If we even get half the support, it will help her as the university has also promised to help her access some scholarship to support her studies,” Mr Gyan-Darkwa pleaded.

Then a girl, she made history when she gained admission to St Louis Senior High School in Kumasi at the age of nine.

When she completed St Louis, she again made history when she gained admission to the Kwame Nkrumah University of Science and Technology at the age of 13 years to pursue a Bachelor’s degree in Mathematics in 2017.