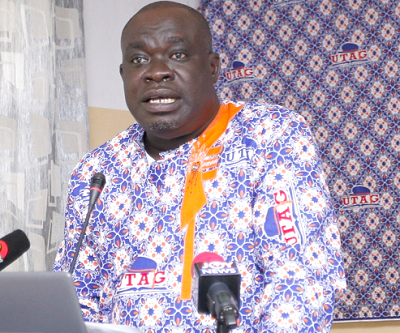 The Ghana Association of University Administrators (GAUA) has urged the government to expedite efforts at resolving the University Teachers Association of Ghana (UTAG) impasse and all other university workers fairly to avoid a total close down of public universities.

The association said it was important to adopt all seriousness required to resolve all labour agitations in the nation's public universities to avoid total closure.

A statement issued jointly by the President and General Secretary of GAUA, Mr Kwabena Antwi Konadu and Mr Felix Adu-Poku respectively, said the government, in resolving those issues, must be mindful of fairness to all categories of staff in public universities.

The GAUA said failure to resolve the issues fairly would escalate the already turbulent labour front in the universities.

It further called on the government to look at issues affecting the GAUA which had been placed before it for resolution and work on resolving them.

"We understand certain gestures have been offered at the negotiations to resolve the impasse. We wish to serve notice that the GAUA is equally affected by the worsening conditions of service and hopes the government will equally respond by addressing our needs placed on the table of negotiation as well, before concluding negotiations with our sister unions,” it said.

The statement said it was optimistic the Fair Wages and Salaries Commission (FWSC) would be guided by the 2012 National Labour Commission Arbitration in solving working conditions.

The statement said " the GAUA, as a critical cadre of professional senior members in university administration, management and governance, whose works were at the core of the universities, the GAUA is appealing to the government to promptly and proactively deal with all outstanding issues of all the four unions to avoid a situation where unions will embark on industrial actions one after another because of unfairness and discriminations’’.

On the recent issues of migration of public universities to the Controller and Accountant-General's Department's Payroll Platform, Conditions of Service for all categories of staff in the universities and related issues, it said the GAUA was disappointed that these issues which could have been resolved amicably were allowed to disturb the otherwise smooth running of universities.

“The GAUA is, therefore, appealing to all sector ministers and their assigns in the negotiations to, as a matter of urgency and importance, resolve these issues which are the cause of the disruption of the already challenged academic calendar as a result of COVID-19 and its related impact on the universities,” it said.

The GAUA is made up of senior members: non-teaching: administrative and professional staff of the universities of Ghana.

By their appointment, the GAUA members are responsible among others for the day-to-day administrative, managerial, professional/technical services and the coordination of activities of universities.