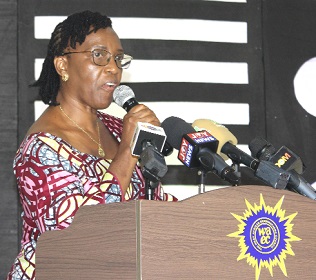 The West African Examinations Council (WAEC) has said it will cancel the entire results of candidates caught with mobile phones in the on-going West African Senior School Certificate Examination (WASSCE) for School Candidates.

According to WAEC, a number of candidates had been caught with mobile phones in examination halls, a practice which was against the rules and regulations of the examination, being written only by Ghana after the four other member countries — Liberia, Nigeria, The Gambia and Sierra Leone — had written theirs.

“Candidates are reminded that their entire results will be cancelled when they are caught with mobile phones in the examination halls. The council wishes to call upon school authorities, supervisors, invigilators, parents and guardians to ensure that candidates abide by this rule. Supervisors and invigilators are also being reminded of the ban on their use of mobile phones at examination centres,” a statement signed by the Head of Public Affairs of WAEC, Agnes Teye-Cudjoe, said.

It said impersonation cases, which hitherto were not being recorded in school examinations, were on the increase in this year’s WASSCE for School Candidates and that some impersonators had been arrested in the ongoing examination and were in the grip of the law.

Supervisors, it said, were directed to deploy the use of the Biometric Verification Device (Vericheck) to identify candidates.

“Intelligence has been received of some school authorities collecting money from candidates and organising syndicate cheating in their schools. Perpetrators of these acts are being cautioned to desist from same. The council has the mandate to de-recognise schools caught engaging in this malpractice. Candidates identified as having colluded would have their results cancelled,” it said.

“Reports reaching the council indicate that some school authorities have adopted the practice of locking their school gates during the examination period with the aim of preventing WAEC inspectors and monitors from gaining access to their school compounds to monitor the examination. School authorities, especially those engaged in this act, are directed to desist from the practice as such activities amount to acts of examination irregularities,” it said.

The council, it said, was working closely with the Ghana Education Service, the National Intelligence Bureau and other security operatives to check infringements of the rules and regulations governing the ongoing examination.

The statement said some hot spots had been identified and monitoring of the centres had been intensified and urged all stakeholders to collaborate with it to safeguard the integrity of the examination.

Before the commencement of the 2022 WASSCE for School Candidates, WAEC said it had put security measures in place to ensure the sanctity of the examination.

The measures include the serialisation of examination questions, collaboration with the National Intelligence Bureau (NIB) to monitor the printing of question papers and the use of number combination padlocks, in addition to ordinary padlocks, for all security bags containing question paper packets.

Others are working closely with some security agencies to track and arrest dealers and operators of rogue websites, the inspection of all depots nationwide and fortification of those that needed to be fortified, ensuring uninterrupted movement of question papers from strong rooms to depots and the creation of additional depots located close to schools to ensure that question papers do not arrive late and are released to candidates early.