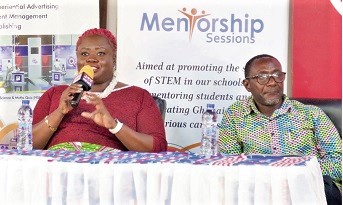 With the rising demand for higher education, the Minister of Education, Dr Yaw Osei Adutwum, has said there is a need for actions to create more opportunities to bridge the already existing literacy gap between the rich and the poor.

He said it was for that reason that the government was undertaking vigorous school reforms right from the basic to the tertiary levels.

“Indeed, over the past five years, the government has implemented cutting-edge reforms in policies aimed to improve education standards and equip learners with the 21st-century skills required to participate fully in the fourth industrial revolution.

“These reforms are rooted in the Science, Technology, Engineering and Mathematics (STEM) to produce a critical mass of assertive employable youth to spearhead our socio-economic transformation,” Dr Adutwum said.

He said this in Accra in a statement read on his behalf by the Principal Programme Officer at the Ministry of Education, Selassie Dzomeku, during the launch of this year’s STEM festival.

The event, which was organised by Primetime Limited as part of the 2021 National Science and Maths Quiz (NSMQ), was to promote the study of STEM in schools and also educate people on the various careers in those fields.

The month-long event will also give opportunities to other young actors to explore and showcase their innovative ideas.

Dr Adutwum said the government had come up with initiatives which had the potential to increase the country’s science-humanities ratio to the desired level in the medium to long-term.

As part of those initiatives, he said the government was expanding and retooling science resource centres of some existing Senior High Schools (SHS) to improve their science enrollment and quality of instruction to create the pipeline for students required to meet the 60:40 science – humanities ratio.

At the tertiary level, he said the government was constructing five STEM-based universities in five of the six new regions of the country.

When completed, he said it would increase the intake of students in fields that would drive industrialisation in the country.

She said the Sci-Tech Fair had been remodelled to comprise a Sci-Tech innovation challenge where participants would be required to build projects by themselves during a two-day event.

He said the mentorship sessions had also been better structured to drive rich learning and development for both mentors and mentees.

Mrs Ankomah-Asare said the platform would afford prominent and experienced individuals working in the STEM-related fields the opportunity to share their experience with participating students and the public.