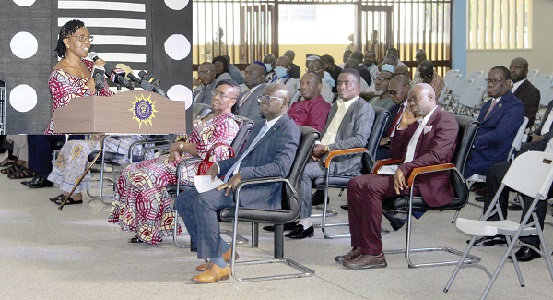 Panel members at a stakeholders’ forum in Accra have proposed various measures to deal with examination malpractice in the country.

The measures include leveraging the use of technology with the adoption of computer-assisted examination, writing of examination in larger halls fitted with cameras to accommodate candidates at a go and making 50 per cent of examination questions practicals.

The speakers, who also called for a collective fight, are a Deputy Director-General of the Ghana Education Service (GES), Dr Kwabena Bempah Tandoh; the President of the Conference of Assisted Secondary Schools (CHASS), Alhaji Yakub Abubakar; the former Head of the Test Administration Division (TAD), Nii Christian Johnson, and the current Head of TAD of WAEC, George Ohene-Mantey.

The forum, which was organised by WAEC, was on the theme: “Seventy years of reliable education assessment — The journey, challenges and the way forward”.

In his submission, Dr Tandoh said that examination malpractice was indeed real and that the council was taking technical and strategic steps to address the problem of cheating in the conduct of examination.

He, among other things, mentioned the serialisation of examination questions introduced during the 2021 Basic Education Certification Examination (BECE), saying that the goal of the GES was not only to prepare students to pass examinations but also to prepare them for life.

He said there were punitive measures in place to sanction staff of the GES involved in malpractice so that examination conducted was not compromised.

Alhaji Abubakar, for his part, noted that there was the need to plug any loophole in the transportation of examination papers to the various schools across the country to avoid leakage and malpractice.

Apportioning blame, he said it was not the best since it was not helping the fight against the canker and that there was the need for all to come on board to deal with the problem.

Mr Johnson, who narrated the risky manner questions were transported in the past, said examination leaks and malpractice did not only affect the credibility of examination, it hurt most when staff of the council were linked to them.

He said “we need to raise our game in order to deal with the problem”
Mr Ohene-Mantey said WAEC had ensured that question papers from its end to the various depots were secured with padlocks and seals, among other things.

He said although there could not be 100 per cent security, the council was doing all it could to protect its examination from being compromised.

Leakages and other forms of malpractice, he said, took place outside the offices of WAEC and that 90 per cent of the cases of malpractice occurred when the question papers left the mandate of the council.

The Head of National Office of WAEC, Wendy Enyonam Addy-Lamptey, cautioned candidates and the general public to be mindful of the activities of rogue websites so that they were not misled, with the on-going West African Senior School Certificate Examination (WASSCE).

The council, she said was collaborating with the national security agencies with respect to the various aspects of administration of the examination.

The Director-General of the GES, Professor Kwasi Opoku-Amankwa, commended WAEC for the organisation of the forum, aimed at promoting the sanctity of examination conducted.

In an address read on his behalf, the Registrar to Council, Pateh Bah, said the forum was to take stock of the past 70 years with a view to making the necessary arrangements.