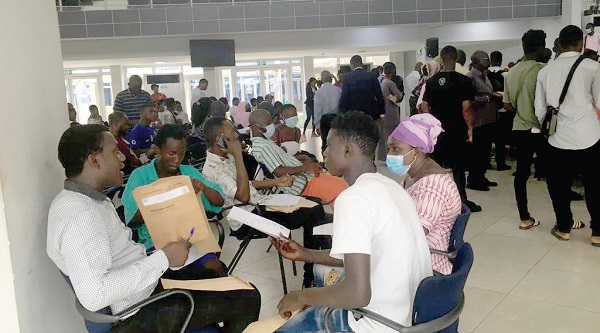 Parents of students whose challenges with the computerised school selection and placement system (CSSPS) have been unresolved have appealed to the Ghana Education Service (GES) to expedite action on their concerns so their wards could go to school.

Though form one students reported to school last Monday to begin their senior high school (SHS) education, some students could not report because they had issues with their schools placement.

Last Monday, many of those affected students and their parents thronged the resolution centres set by GES to help address the issues to demand a quick resolution to their concerns.

Among the challenges raised by some parents are males being placed in female schools and vice versa, students placed in day schools in locations far from their homes as well as inability to successfully go through the self-placement process.

At the Ghana National Association of Teachers (GNAT) Hall in Accra, parents and guardians said the challenge was that the system has messed things up. “Form one students have reported to school, but my child is still at home despite making the grades required to be placed. The frustration is unbearable,” a parent told the Daily Graphic.

Unlike previously when scenes at the Black Stars Square depicted disorganisation and agitations, the Daily Graphic observed that the centre set up at the GNAT Hall was well organised.

When the Daily Graphic visited the place, which is the National Resolution Centre, last Monday and Tuesday, it observed that parents and their wards were comfortably seated, waiting for their turn to be attended to.

There was no incidence of chaos witnessed and the coordinators went through less stress to ensure the challenges brought were addressed.

The challenge that was witnessed was an instance when the microphones stopped working and the officers had to scream on top of their voices to call names of the complainants.

Samuel Asare, a student who spoke to the paper, expressed satisfaction about the process of seeking redress, saying: “I was reluctant to come here due to the challenges my brother went through last year to get his school changed, but I decided to give it a try and I think compared to last year, the process is better. However, my concerns have not been entirely addressed,” he said.

A number of the parents who had come for help said they had not been successful with the self-placement exercise.

“We have had to come back here for a second time because since last week, we were asked to do self-placement and we have tried several times without success. Anytime we tried, we got this feedback: Error. I don’t know what to do now because my daughter is feeling depressed and has refused to eat,” a worried mother said.

Speaking to the Deputy Coordinator of the Free Senior High School Secretariat, Nana Afrah Sika Mensah, she said most of the complaints received so far were about change of school, change of programme and change of status.

In some few instances, she said some students were given single-sex schools of their opposite sex.

So far, she said 2000 complaints had been received nationwide as at yesterday and 80 to about 85 per cent have been resolved.

“The only challenge we are facing is that most of the parents and guardians are not responsive. We call their contact numbers several times but we don’t receive any response and that slows the process.