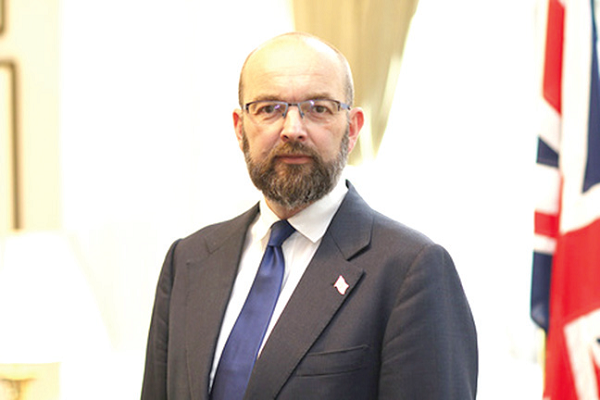 The UK Minister for Africa, Mr James Duddridge, has called on developing countries to prioritise education spending in their own national budgets.

At a virtual press conference, he also urged developing countries to work towards spending more public money on education.

Mr Duddridge was addressing selected journalists from the UK and Africa ahead of this year’s Global Education Summit to be co-hosted by the UK Government and Kenya in London, which begins today.

The two-day conference seeks to raise funds for the Global Partnership for Education (GPE) to give 175 million children from developing countries the opportunity to learn.

The conference seeks to drum home the fact that getting girls educated is one of the smartest, most sensible investments that will lift the population out of poverty, grow economies and create safer communities.

“Girls’ education is a game-changer,” Mr Duddridge said, stressing that the issue was not just tackling the scourge of gender inequality; it was about empowering girls and giving them the opportunity to be in the classroom.

“If we can get all girls to have quality secondary education, child marriage — which is a violation of children's rights and exposes them to gender-based violence and early pregnancy — could fall by two-thirds,” the minister told journalists.

He said ensuring that every girl had access to 12 years of quality education was a UK Government priority.

The minister said conversely, girls with little education or no education were six times more likely to marry before the age of 18 compared with their counterparts with secondary education.

“If we look at economic growth, $28 trillion could be added to global GDP if women had the same role in the labour market as men.

“So getting an education is a vital enabler to economic development,” Mr Duddridge stated.

He observed that educated women earned more across sub-Saharan Africa as one year of additional schooling could increase a woman’s lifetime earnings by around 12 per cent, describing the benefits as intergenerational.

He said the UK Government had rallied the G7 leaders to adopt and implement the vital agenda “which they indeed did when the UK hosted the Leaders’ Summit”.

“Last month, the UK made our biggest-ever pledge to GPE, £430m additional money, to get the world’s most vulnerable children, particularly girls, into school.

“This is the second largest pledge ever made to GPE — an increase of 15 per cent on our (previous) annual pledge and the largest bilateral pledge so far,” Mr Duddridge said, adding that it was a strong testament to the UK’s commitment to getting vulnerable children, particularly the girl-child, to be educated.

He urged other donor countries to do more than ever before for the summit, saying, “Multilateral partners like the World Bank and UNESCO must also play their part. Philanthropic foundations and the private sector will also need to rise to the challenge.”