Nsein SHS to be renamed after Dr Kwame Nkrumah 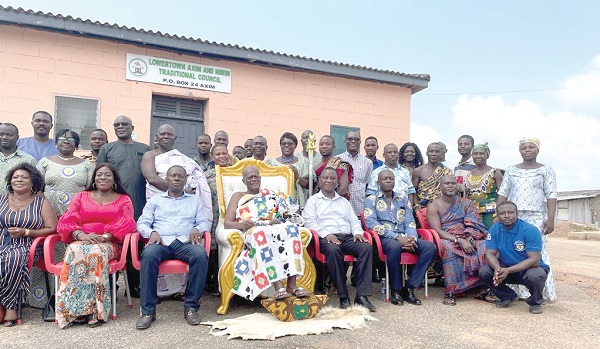 The decision is in collaboration with the Nsein Traditional Council, and the old students association (NOSA) of the school.

This would bring to an end, a 30-year-old litigation over how the school sited near Axim should be known.

This significant agreement was reached when a representation of the old students, the school’s board and management paid a courtesy call on the Paramount Chief of Axim, Awulae Agyeifi Kwame II.

As part of the processes for the official renaming of the school, a petition from the board is to be sent to the government through the Ghana Education Service to request for a change in name.

Once the request is approved, an inauguration will be performed to climax the 2023 Kundum festival on September 21, to coincide with the late President Nkrumah's birthday.

The visit was to enable the parties to conclude discussions on the issue after the school had formally petitioned the Paramount Chief.

Among the school’s delegation was the Chairman of the board of governors, Abraham Aikins, the Headmaster, Isaac Sowah Kumah, Dr George Sipa Yankey and Catherine Afeku who represented the old students.

Established in 1960, the school was originally named after the first President, Dr Nkrumah, whose regime built it, but was changed to Axim Secondary School in the wake of the 1966 coup d'etat.

The traditional council took exception to the new name on grounds that the school was situated on Nsein soil.

The dispute became a subject of a court case from 1967 until 1972 when the name was again changed to Nsein Secondary. Since then, past students had pressed for a reversal to the original name.

Dr Sipa Yankey, a former Minister of Health and former CEO of Ghana Gas Company Limited, said the school and by extension, the area, stood to benefit from its association with Dr Nkrumah, an internationally recognised Pan-Africanist.

“As Kwame Nkrumah SHS, this would be the only second cycle institution in Ghana named after the first President who was, and still is, universally acknowledged as Africa’s Man of the Millennium. The benefits are unimaginable," he said.

For his part, Awulae Agyeifi Kwame II, said following the petition from the school’s stakeholders and considering the role Dr Nkrumah, a son of the Nzemaland, “the traditional area has agreed to rename the school Kwame Nkrumah Senior High School, Nsein”.

The school was established in 1960 under the Ghana Educational Trust (GET) in the First Republic. It grew to become one of the country's Class A schools, with high-quality academic performance by succeeding students. In sports, it has produced some of Ghana's noted athletes some of whom rose to become national coaches.