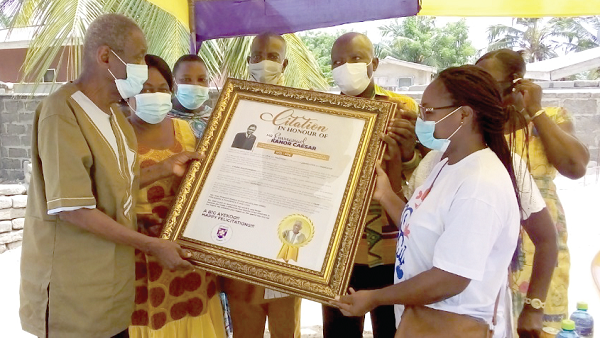 The old students of the Nsaba Presbyterian Secondary School have honoured their dedicated and committed former headmaster of the school, Mr Emmanuel Kanor Caesar, at his 90th birthday celebration at his residence at Ada-Foah in the Ada East District of the Greater Accra Region.

Mr Caesar, popularly known as Mr EK Caesar, was the last principal of the defunct Nsaba Presbyterian Teacher Training College and the first headmaster of the Nsaba Presbyterian Secondary School in the Central Region from 1972-1976.

The old students, were represented by a team which presented Mr Caesar with a citation, a hamper and an undisclosed sum of money.

The leader of the team, Rev. Elvis Owusu Appiah, in his said Mr Caesar’s sincerity, devotion to duty, commitment, faithfulness, integrity, transparency and selflessness exhibited during his time of administration of the school were something the old students had learnt from him.

The old students described Mr Caesar as a consummate teacher whose achievements and excellence in changing lives were beyond comparison.

“You were a disciplinarian who never spared the rod to spoil the child, a giant advocate for success and a dynamic catalyst who engineered the academic success of your students.

“Today, your well-nurtured students can boast of their success as medical doctors, pharmacists, engineers, architects, educationists, lawyers, business tycoons, lecturers, men and women of the cloth among others,” the old students eulogised their mentor.

“We are forever indebted to you for your selfless service, hard work and dedication to duty that have made us whom we are today.

“As our first astute headmaster and the last principal, we are proud to place you in the educational hall of fame in Ghana as educator extraordinaire, a headmaster  par excellence, an epitome of high standard and performance among your peers, you stand tall without equals’’, the citation stated.

Mr Caesar on behalf of his family was also grateful to the old students for their show of gratitude for his service to the Ghana Education Service and to mankind during his time of administration of the college and the secondary school.

He told the team that as a teacher, a headmaster and a principal at the time, he might have stepped on their toes but it was not meant to hurt and harm them, but rather for their own good.

Mr Caesar, who is very good at names mentioned a number of the old students’ names and their characteristics in those days to refresh their memories to the admiration of the team. He also spoke joyfully to some on phone from outside the country at the programme.

He prayed for the old students both home and abroad and wished them God’s blessings in all their endeavours. He appealed to his old students, who are ministers of the word of God to intercede on behalf of the country saying ‘’the corrupt practices going on cannot help us’’.