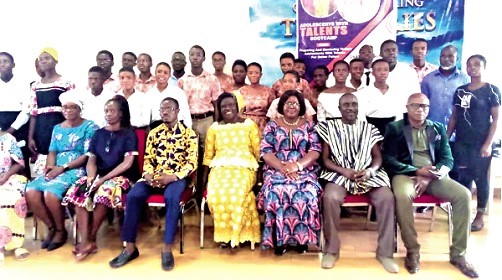 Gifty Mussey (seated 3rd from right), the Adentan Municipal Director of Education, with other invited guests and students after the event
30.5k Shares

According to him, guidance and counselling assisted students and other learners to accept the right social and academic life and they also ended up having a good career.

“So it is always good for directors to encourage their guidance and counselling coordinators to organise programmes that will bring out students’ strength and ability to excel in these three areas — social life of the child, the academic life of the child and the career of the child,” she said.

Mrs Mussey said this at a boot camp for adolescents with talents organised by Dynamic Works, a non-governmental organisation and Drama Troupe in Accra.

She noted that the reason why children were being educated was for their future career, to make sure they were able to integrate in society and become successful in future.

Mrs Mussey, therefore, said it was important that children were guided in taking the right decisions for the betterment of their lives.

Speaking at the event, the Ayawaso Central Municipal Director of Education, Augustus Owusu-Agyemfra, congratulated the NGO for organising the programme aimed at unearthing the talents of children for a brighter future.

“We could develop an information pack to advise schools on how to foster mentoring. It is a very cheap way of supporting gifted children,” he said.

A lecturer at the Department of Theatre and Film Studies at the University of Cape Coast, Dr Madinatu Bello, told the youngsters that the field of arts was multi-disciplinary and that people with interest in other fields could also venture in that area.

“Even if you are in the sciences, it does not stop you from going into the arts because now, we are going digital. We have moved into the digital/technology era. So, we are inter-disciplinary, trans-disciplinary and multi-disciplinary. We cut across all aspects of life,” she emphasised.

An Administrator/Artist Manager/Producer, Hagan Awuku, said the creative arts industry “could give us a lot of income provided we are able to structure things well.”

He, therefore, advised youngsters to venture into the industry and urged the government to look at that area well in view of the potential it had for the good of the country in terms of addressing unemployment, among other things.

The Director of the NGO, Gloria Cann, who is also a musician and a poetess, said the programme, which was the second, aimed at ensuring that the future of youngsters was brighter.