Parents advised to m­onitor children’s use of phones 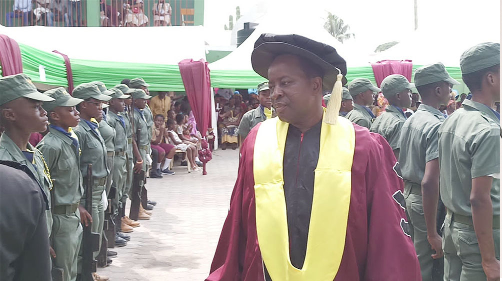 Francis Essel-Okyeahene, Director of Young Executive School, inspecting a guard of honour mounted by members of the cadet corps of the school
30.5k Shares

The Director of Young Executive School at Kasoa Opeikuma, Francis Essel-Okyeahene, has called on parents to monitor the use of mobile phones by their children.

That, he said, was to ensure that children did not abuse the use of mobile phone.

According to him, a lot of social vices going on in the country were picked up by some persons at a very tender age during their usage of phones when they visited certain sites unguided.

According to him, a lot of children used their phones to download unnecessary things while others were using Internet to watch criminal activities, and that if care was not taken it would have devastating effects on the society at large.

Mr Essel-Okyeahene, therefore, entreated parents to monitor what their children used their phones for and compel them to make good use of social media.

Mr Essel Okyeahene disclosed this when he awarded five best teachers with a plot of land each.

Others were also presented with refrigerators.

The event also formed part of the graduation ceremony of the Young Executive School.

Mr Essel-Okyeahene, who is also the Chief Executive Officer of the Onua Francis International School, noted that children were the future leaders and needed to be guided to develop into responsible adults.

At the event, the Chief of Kontomponia Afari in the Ashanti Region, Nana Kwesi Awuah, commended Dr Essel-Okyeahene for what he had done for his teachers.

He, therefore, entreated Ghanaian workers to be faithful to their employers since they did not know when they would be rewarded.

The teachers honoured commended the director of the school for what he had done because they were not expecting such rewards.