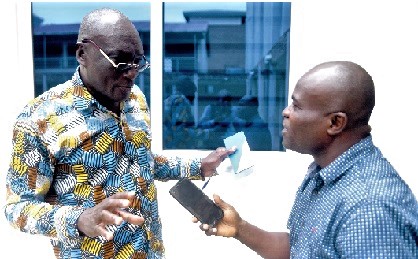 Bertinus Adams Kaleo (left), General Secretary of the National Conference of Principals of Colleges of Education, being interviewed by Emmanuel Bonney of the Daily Graphic
30.5k Shares

Following their conversion into degree-awarding institutions, colleges of education have begun phasing out the wearing of uniforms by their students.

In addition, students no longer need exeats to go out and are also free to wear beards.

Until now, students of the colleges of education were compelled to wear uniforms for all occasions once they were on the campuses.

The General Secretary of the National Conference of Principals of Colleges of Education (PRINCOF), Bertinus Adams Kaleo, made this known in an interview with the Daily Graphic during a national dialogue on Initial Teacher Education in Accra.

“It used to be that once students are on campus, they must wear their uniforms, but we are progressively getting away from that.

“Some colleges have now decided to adopt branded college cloths, and with that there are no specific styles students are required to sew in most of the colleges,” he said.

Mr Kaleo, who cited his college, the Tumu College of Education, said it had three different types of cloths being used on the campus.

“Another issue is that because of the tertiarisation, we have stopped giving exeats. You can call any of my students in Tumu and those who have completed and check; they can now go to town at will because we think they are responsible students,” he added.

He further said students who did not attend lectures were not chased, as was the case in the past, “just like in the universities”.

On whether the current review was being carried out in all 46 colleges of education, Mr Kaleo said: “I know majority of the colleges are going through similar reforms.”

On feeding, he said students were being fed on GH¢7 for three square meals — breakfast, lunch and supper — and described the amount as woefully inadequate.

Mr Kaleo called for the empowerment of the governing councils of the colleges to give direction in the implementation of the reforms.

“If the governing councils come out to say let us do away with a particular decision, who is a principal to say no?” he asked rhetorically.

Following a comprehensive review of the educational system in 2004, the then 38 training colleges were upgraded to diploma-awarding institutions and affiliated to the University of Cape Coast.

Subsequently, eight more private colleges were absorbed into the public system by the government.

These included a modular-tailored form of training to prepare teachers to teach in basic schools in the country.