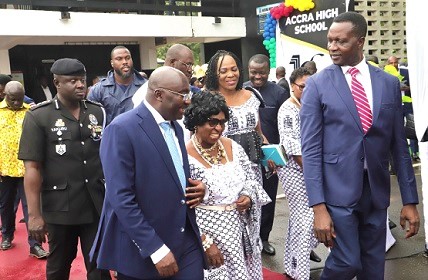 The Vice-President, Dr Mahamudu Bawumia, has launched the centenary anniversary of the Accra High School, with a call on all to rally behind the government to prepare the youth to take the mantle of leadership of the country.

He mentioned the free SHS policy as one of the measures embarked on by the government to enable many young girls and boys to acquire secondary education.

According to him, the policy had also brought great relief to parents and said the government was undaunted and would, therefore, continue with the policy.

“We cannot afford to disappoint the youth and future leaders of our country. So far, so good; the free SHS has seen the enrolment of hundreds of thousands of people, boys and girls who, otherwise, could not have attained SHS education.

“We are also very pleased that as a result of the free SHS, more girls have enrolled and there is now virtual gender parity in SHSs across the country,” Dr Bawumia added.

Established as a private institution with eight students in the Eastern Province of the Gold Coast at Ayalolo in Accra on August 17, 1923, the Accra High School is the oldest secondary school in the Greater Accra, Eastern and Volta regions.

It operated as a private school until 1952 when it was absorbed as a public school by the government.

With its liberal doctrine, it paid special attention to drama and vernacular, arts, music, secretarial and agricultural training and caught the attention of President Kwame Nkrumah, who rewarded the school with nine acres of land at Ridge, its present site.

Dr Bawumia unveiled a logo for the anniversary on the school premises over the weekend.

The anniversary is on the theme: “Accra High School at 100: The state of education, the school and the future.”

Activities earmarked for the year-long celebrations include a fun fair and homecoming, lectures, a founders’ day, a health walk and screening, an exhibition and a grand durbar in November next year to climax the celebrations.

He also expressed appreciation to past headmasters and headmistresses, tutors and all who had, in one way or another, contributed meaningfully to the success of the school.

He said 100 years was a great milestone in the history of an institution and urged the authorities of the school to use the occasion to chart a new chapter for the school.

On the prevailing global economic challenges and their resultant high cost of living, Dr Bawumia said: “We are putting key pillars in place for the economic transformation of the country in the midst of the challenges.”

He said notwithstanding the difficulties, the government was focused on building a new economy, adding that “these challenges will be overcome and we will benefit from what we are doing now”.

The Minister of Education, Dr Yaw Osei Adutwum, said the introduction of the free SHS and technical and vocational education and training (TVET) was a means to the total transformation of the country.

He said the government was also focused on Science, Technology, Engineering and Mathematics (STEM) schools to increase the number of students doing STEM-related programmes at the SHS and tertiary levels.

The minister said seven technical colleges were under construction across the country, while 12 STEM high schools and five STEM universities were going through feasibility studies.

For her part, the Headmistress of the school, Ms Evelyn Sagbil Nabia, expressed appreciation to the government for the various forms of support to the school and appealed for the renovation of all structures, including the boys and the girls’ dormitories, the construction of a new administration block and more staff accommodation and the provision of vehicles to facilitate effective teaching and learning.

She said her vision was to elevate the school to a first-class institution by providing holistic education for students through innovative teaching methods by a well-motivated staff.