‘I'm black, my partner's white - stop asking me if this is my baby’ 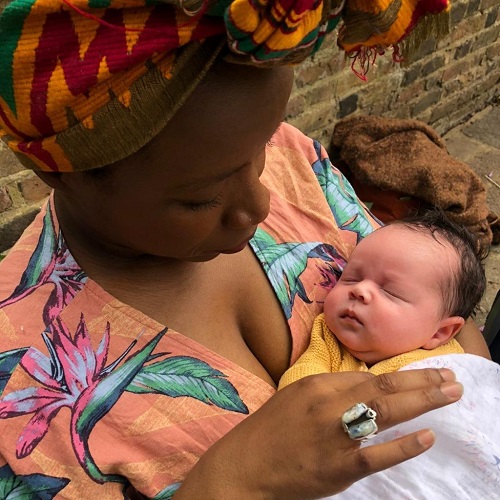 When Ena Miller had a baby last year, she was unprepared for the constant comments about her daughter's appearance. Follow @Graphicgh

When Ena Miller had a baby last year, she was unprepared for the constant comments about her daughter's appearance.

From the day my baby was born she was judged by the colour of her skin.

After spending a day and a night in intensive care, Bonnie had been reunited with me for only a few hours when a woman popped her head around the door to ask what I would like for breakfast.

Before I could reply, she asked, "Is that your baby?"

I anticipated the next thing she said would be a compliment - "Isn't she cute!" or "Her cheeks are so chubby!"

Instead she repeated, "Is that really your baby?"

Her tone was surprised, slightly shocked. Her use of the word "really" triggered a few alarm bells.

"She looks so white. Look at her hair, it's so straight. She's so white," she continued.

And that's when it all started - strangers feeling free to question whether I was Bonnie's mother, or comment on the colour of her skin.

It happened in the hospital where I had just given birth. It would happen again later when out shopping, sitting in restaurants and visiting friends.

I have brown skin. My partner's is white. Bonnie is mixed-race.

From the maternity ward I sent pictures of Bonnie to people I loved and a few responded with one-line sentences, not sugar-coated in the way a new mum might expect.

"I prefer the picture where she looks more African."

One felt the need to use capitals: "She's STILL white."

(A mixed-race baby may be born with skin a shade or two lighter than it will end up.)

Bonnie and I spent five days in hospital alone. It was during the first Covid wave - no visitors allowed. My partner could only check in on us via WhatsApp video, and this meant I had plenty of time to Google and worry about people's comments.

Would Bonnie always have to explain who I was?

Would I always be mistaken for the nanny?

I wasn't ready to live with this.

Five weeks after we left hospital, a lovely walk turned unpleasant. A man appeared, aggressively shouting, "Why is your baby so white?" He circled around us, seemingly enraged.

I was appalled, afraid, and embarrassed by the audience he had attracted. I couldn't understand why this man, who was the same colour as me, was so offended.

In fact, all the negative comments about my baby's skin colour were from people the same hue as me. I didn't get it. I had never imagined mixed-race families had to go through this.

My biggest regret is that I didn't defend my family. I said nothing. I walked away from this angry stranger, holding my tears back until I reached the safety of my own home. I never spoke about the impact it had on me - until I met Wendy.

Wendy Lopez is 60, lives in South London and tries not to take life too seriously.

Twenty-eight years ago she gave birth to Olivia. Her friend called the maternity ward from Guyana in South America to check if her baby was white or black. Wendy laughs while recounting the story. That's how she deals with things.

Olivia had brown hair, but with "big blonde curls" at the front.

"It was like she'd been to the hairdresser and someone had put rollers in her hair," Wendy says.

A doctor asked Wendy if she had "white in the family", and she explained that Olivia's father was white. But he said: "No, no, no, you've got white in your family and that's the reason why Olivia is so pale."

"I'm thinking, 'Why are you telling me all this?'" remembers Wendy. "Does he go around to all the mums and discuss their child's colour? I bet you he didn't."

Wendy admits her mum didn't approve of her granddaughter's skin colour and would occasionally refer to her as "the white girl", but she felt she could cope with that. It was more difficult coming from strangers.

One incident was particularly upsetting. Wendy was doing her weekly shop in Deptford, south London, with Olivia in the buggy, when she walked past three black men standing outside a pub.

"One of them came towards me. He sees Olivia and asks, 'Is that your child?'

"I basically disowned my child, but in that situation I would do it again.

"I have no regrets. I felt threatened. I was scared. I could smell he'd been drinking. I thought he might beat us up," says Wendy.

"You see in them days it wasn't OK for black women to be with white guys."

Today people usually show their disapproval in other ways, and Wendy doesn't stay silent - partly because Olivia has a learning disability and cannot defend herself.

"I went to get a Covid jab a few months ago and the nurse asked if I was Olivia's carer, and when I said I was her mother, she asked if I actually gave birth to her," Wendy says.

"I can't let people get away with saying these things to me."