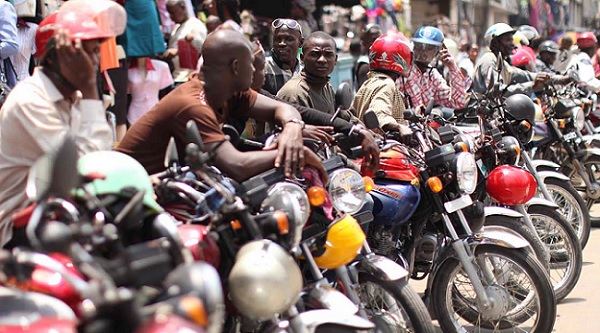 Be cautious about siting on motorcycles

Heat from the engine of motorcycles can reduce sperm count.

The heat can affect the testes where the sperms are made and stored.

According to the Chief Medical Officer at the Medi-Moses Clinic and Herbal Centre in Accra, Dr Moses Degaulle Dogbatsey, the optimum environment for sperm production is lower than the body temperature which was why the testes and penis hanged outside the body.

The testes, he explained, needed a cold environment to produce more sperms, however, men who ride motorbikes sit on the perineum (the space between the anus and scrotum) and so heat is trapped around the testes, making the situation likely to affect sperm production.

“God in his own wisdom positioned the penis and testes at an area where they can hang freely and have access to air, when you constantly expose them to heat, you reduce their ability to produce more sperms,” he stated.

Motorcycles have become a popular means of transport in Accra and other regional capitals, as some road users find them an alternative way of dodging hours in traffic.

Although illegal, the use of motorbikes for commercial purposes, popularly known as “okada”, has also gained popularity in different parts of the country with many young men depending on the business to survive.

There are also many delivery service operators who use motorbikes as their means of transport.

In addition to the many safety challenges saddling the use of motorbikes, The Mirror wanted to know other health challenges.

Dr Dogbatsey, who is also the CEO of the Medi Moses Group of Companies, added that in over a third of infertility cases, the problem was with men as some had problems with sperm production or with sperm delivery.

“Making mature, healthy sperm that can travel depends on many factors and some problems in the male reproductive system that can prevent the sperm from reaching the egg. The temperature of the scrotum can also affect fertility”, he added.

He explained that in some cases, the sperm may not grow fully, be oddly shaped, not move the right way, be made in very low numbers (oligospermia) or not made at all (azoospermia).

“Damage to the reproductive system can cause low or no sperm. About four out of every 10 men with a total lack of sperm (azoospermia) have an obstruction (blockage) within tubes that the sperm travel. A birth defect or a problem such as an infection can cause a blockage

“Other causes of low sperm numbers include long-term sickness (such as kidney failure), childhood infections (such as mumps) and chromosome or hormone problems (such as low testosterone),” he said.

These medications are most often given to treat health problems like arthritis, depression, digestive problems, anxiety or depression, infections, high blood pressure and cancer.

Diagnosis
The medical doctor admitted that it was hard to diagnose the causes of infertility in men, and that diagnosis must start with a full history and physical exam. It could also include blood work and semen tests to assess the strength of semen.

Treatment
Depending on the cause of infertility, non-surgical or surgical therapy may be recommended, adding that there are many treatment options available.

“Many problems can be fixed with drugs or surgery and this would allow conception through normal sex.
Even men who have low sperm production as a cause of no sperm during ejaculation can be treated with surgery to find sperm, together with assisted reproduction, since several million sperm have to be made in the testicles before a group of sperms survive to make it into the semen.

Assisted reproductive techniques
Dr Dogbatsey said if infertility treatment failed, there were ways to get pregnant without sex.

These methods, known as assisted reproductive techniques (ARTs), are recommended based on the specific type of infertility and the cause.