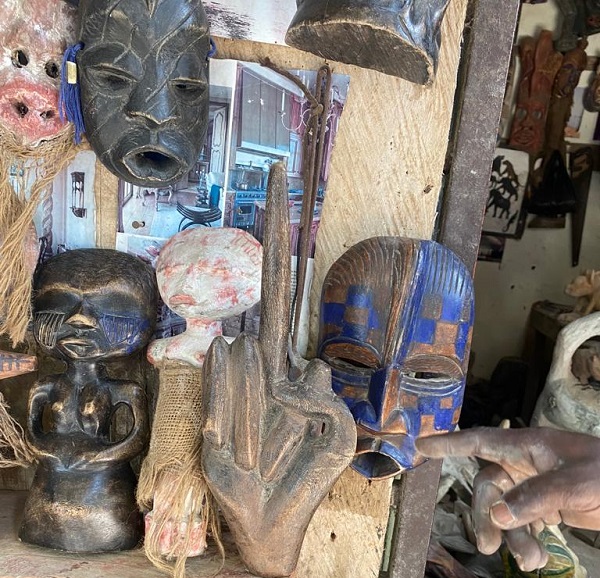 Among the many wooden carvings at the shop of one of the carvers within the Aburi Craft Village, Mr Samuel Offei Denkyira, were two wooden hands with middle fingers sticking out, to signify the “F” word.

This work of art, according to Mr Denkyira, is one of his many works which sells like hotcake at a price ranging between GH₵ 150 and GH ₵450 depending on the size.

In many cultures, the physical act of raising the middle finger is considered an obscene gesture used for offensive or humorous effect.

In a chat at the village during a four-day exhibition organised there by the Ghana Export Promotion Authority from December 28 to December 31, 2022, Mr Denkyira told The Mirror, “I don’t know why, but many who visit my shop from home and abroad love this carving. Some of them make orders and I am very happy to make them”.

The other art pieces included stools, different kinds of animals such as elephants and cheetahs, dolls, including the “thunder god” from the Volta Region and fertility dolls called Akuaba and musical instruments. The thunder gods come in human form with big stomachs and a number of nails hammered in them.

The concepts originate from all over Africa especially Benin, La Cote d’ Ivoire, Congo and Nigeria.

The carver believed that all one had to do to make the carvings spiritually powerful was to pour any kind of blood on it.

“In fact, all the carvings in my shop can become powerful once blood is poured on them”, he claimed.
Asked the kind of blood, he said “any, that of animals, any”. 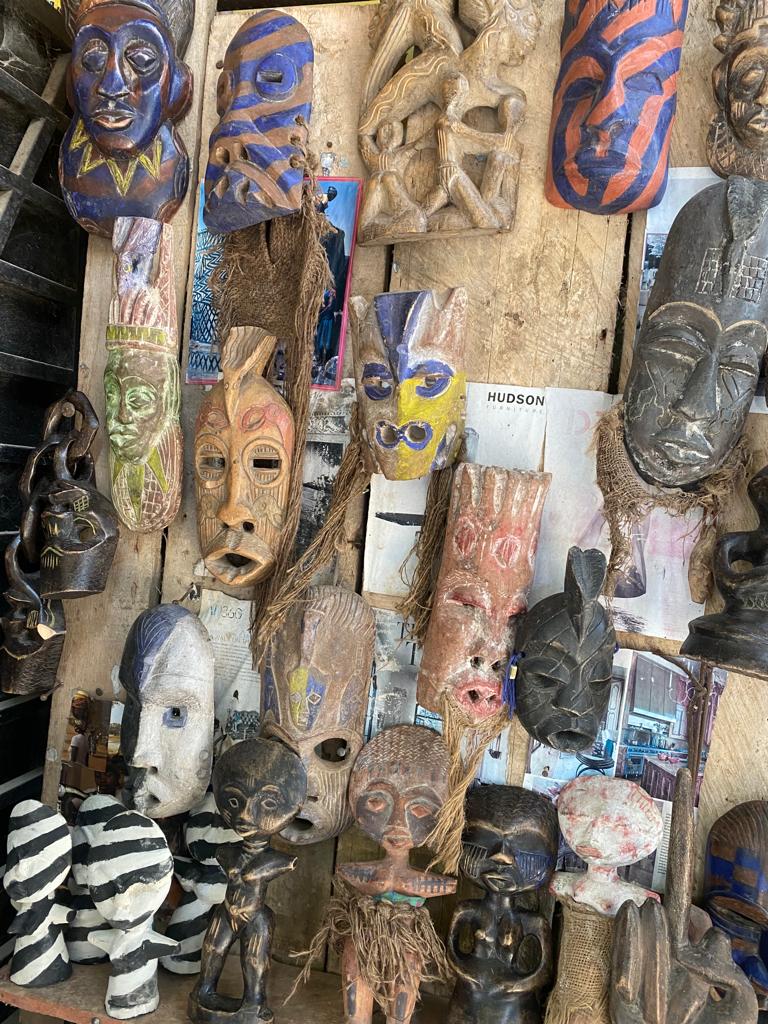 The carver said most of his carvings were made from “Osese”, the kind of wood used to carve the stool of the Asantehene and takes about two months to make.

The 62-year-old started serious work as a carver in Aburi, his hometown, in 1983 when he returned from Nigeria where he had gone to seek greener pastures.

He had been there for four years when the then President Shegu Shagari gave an executive order in January 1983 which deported immigrants without proper documents. They had to leave the country or face arrest. He was one of the many Ghanaians who returned.

In Nigeria, the carver worked as a waiter and construction worker but had the innate skill of a carver and artist which he had realised in primary school.

“My teachers recognised my skill. In fact, many times when we were asked to draw, my classmates would let me do theirs for them. Sometimes I will take something small for doing this”, he said.

After Middle School Form Four, Mr Denkyira entered the Afienya Youth Leadership Training Institute at Afienya in the Greater Accra Region and left after completion to seek a better life during the oil boom in Nigeria.

Back home, Mr Denkyira commercialised his skills as a carver. 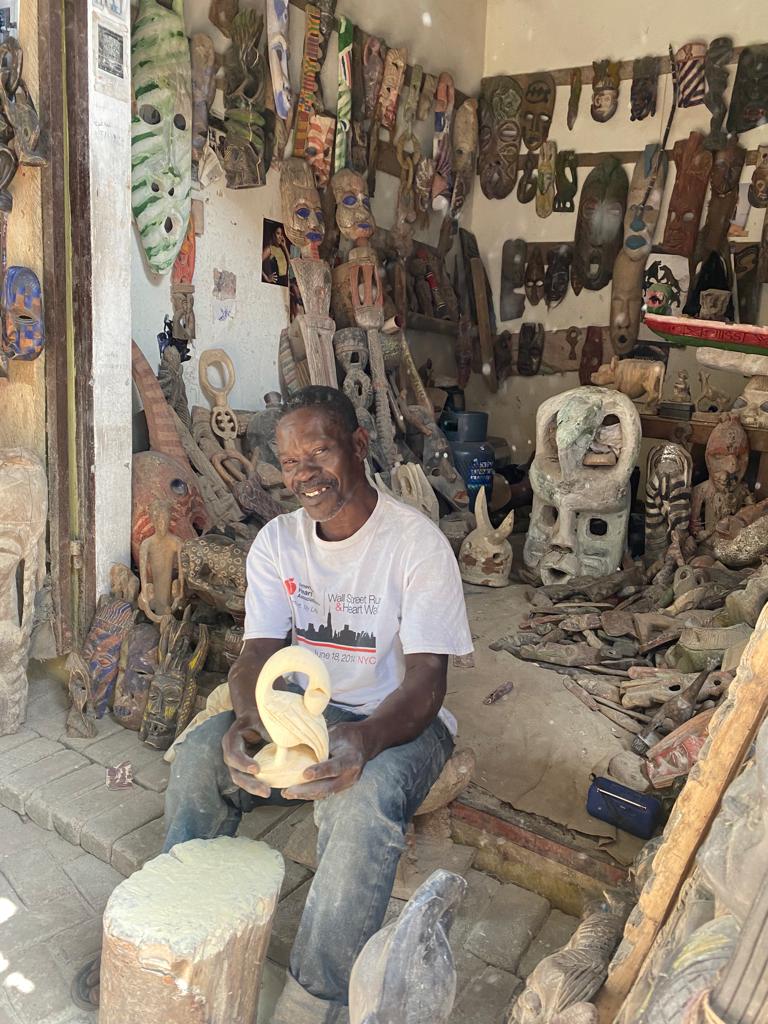 He says that business was not too bad until the COVID-19 pandemic.

“Even though it has gone down, business has not gone up”, he complained.

“Sometimes, I make no sale at all in a day, other times I make about GH₵ 600, but I am thinking about the future. What will I do when I am older and no longer able to work this hard? How will I look after myself and my family ”, he asked.

“I used to work as a security man for additional income to what I make from carving but I had to stop because I simply couldn’t do the security any more”, he explained.

He, therefore, appealed to the government and non-governmental organisations to establish a museum for the works of carvers and other artists where tickets will be sold to visitors not only to buy artworks but see the works.

Part of the revenue from that, he said, would take care of the artists in their old age as a form of pension.
On other challenges, Mr Denkyira said some fraudsters often presented themselves as visitors from abroad ready to do business.

“They will take free samples saying they will market and send big orders once they get back abroad. After this, they block their numbers”.

The availability of wood for work is also becoming a challenge for the carvers with deforestation but Mr Denkyira said the association of carvers at the village had planted some trees at Nsawam and they also travelled wherever they could within the country to buy wood.

Mr Denkyira said he had a little farm where he had planted some trees.

He appealed to Ghanaians to patronise made in Ghana goods saying “what I have here are wonderful pieces for decoration and gifts”.

Mr Denkyira’s colleague, whose shop was directly opposite, 44- year-old Albert Cornelius added his voice to the call for the establishment of the museum. 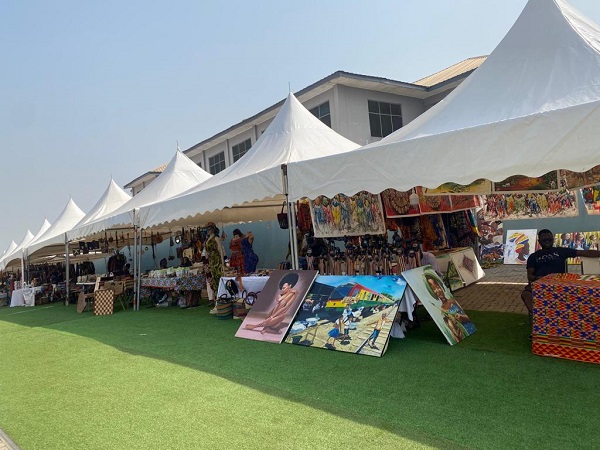 He said his works had been showcased in a number of exhibitions both home and abroad and also called for patronage to sustain the carving industry.