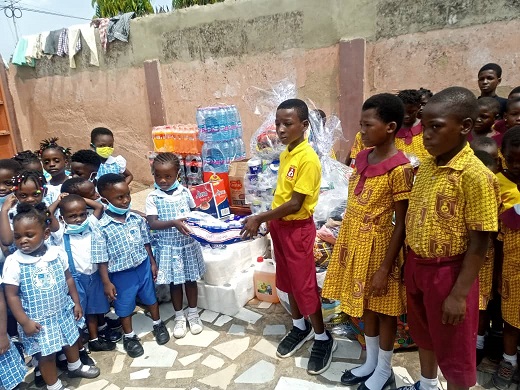 Kweku Nyamekye (third right) a pupil of the school, presenting one of the items to Innocentia Amakye of the Happy Family Shelter. Follow @Graphicgh

Pupils of St Matilda’s School at Awoshie have donated assorted items to the Happy Family Shelter at Kwashieman in commemoration of the birthday of their founder, the late Mrs Matilda Acheampong.

The Chief Executive Officer of the school, Mr Anthony Fearon, who led the delegation to make the presentation, said the initiative sought to help vulnerable kids to improve their livelihoods.

“As part of the school’s Corporate Social Responsibility (CSR), we decided to reach out to these kids so that they would also feel loved,” he stated.

He added that the day was specifically chosen because the founder’s birthday fell on that day.
The Director of the Shelter, Madam Gifty Annan, who received the items on behalf of the kids, expressed her gratitude to the school.

She said the donation was a timely intervention to rescue the home since all their food, mattresses and clothes had been destroyed by the recent downpours.

She appealed to the public to come and support the home which was in dire need.

For her part, the co-director of the school, Mrs Doreen Hinson, urged the children at the home to study hard, be humble and strictly abide by all rules and regulations.

“The beginning doesn’t matter. It is the end that will justify the means.” she added.