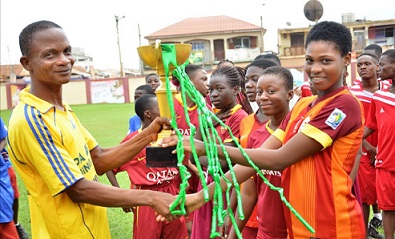 The St Mary’s International School at Ashaiman in the Greater Accra Region has held its annual inter-class football competition to promote good health among the schoolchildren.

The girls were grouped into two teams, namely, Team Green and Team Yellow, while the boys were also grouped into Team Red and Team Blue.

At the end of the match, Team Green defeated Team Yellow 2-1 in the girls’ category.

Team Red beat Team Blue by 6-5 in the boys’ category.

Speaking at the opening ceremony, the headmaster of the school, Mr Francis Ozuh, said the games would help students to unearth their talents, socialise and also have fun, which would impact positively on their academic performance.

“As the saying goes, all work and no play makes Jack a dull boy, so we want our students to be more active,” he said.

Some of the children who spoke to the Junior Graphic expressed joy at the return of sporting activities, adding that it would help them build valuable social skills such as motivation, commitment, cooperation, leadership, and self-discipline.

The football match is the first event organised by the school after the government relaxed COVID-19 restrictions in the country.