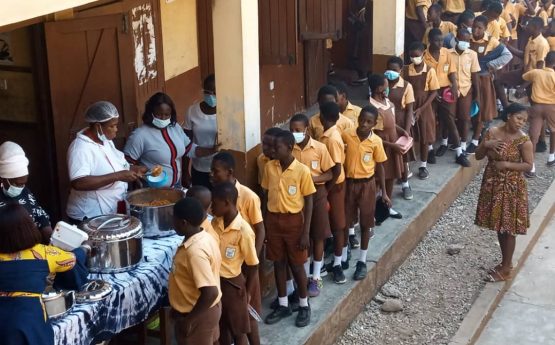 Beneficiaries of the Ghana School Feeding Programme (GSFP) have appealed to the government to take considerable measures to improve the quality of food served to ensure their proper growth and development.

They complained that their lunch came in very small quantities and without fish or meat, saying, for instance, they ate banku without fish and beans without riped plantain.

The children raised the concern when the Junior Graphic visited some public schools in Accra to ascertain if schoolchildren still enjoyed one hot meal a day after the government had settled part of the debt it owed caterers of the GSFP.

Visit to schools
Class Six pupils of the Mamprobi Salvation Army ‘B’ Primary School, Mercy Ampadu and Aaron Ampah, said even though the caterers cooked for them on a weekly basis, the food they served was very small.
“The food is served in very small portions. By the time we get back to our classrooms, we are still hungry. Sometimes some of my mates do not get food to eat because it never gets to their turn.
On the days that the caterers don’t come, we have to feed from our own pockets, so if you don’t have money, then you have to go hungry all day,” they said.
At the Kaneshie Kingsway 1 Basic School, a Class Four pupil, Anastasia Coffie, who had already eaten her lunch, attested to the fact that she had been receiving the food regularly, except that the quantity was small and it was without meat or egg.
She said they were served a small ladle of rice or beans so that everyone could be served.
“I have to buy food from outside to top up what the caterer gives to us to sustain me the whole day,” she said.
Class Two pupils of the school, Rebecca Addo and Jessica Ankomah, said they were provided with meals every day but they found it difficult to eat because it was not tasty.
At the Abeka 1 Primary and the Accra Newtown Experimental A and B Basic schools, some of the schoolchildren said they were served banku with small pepper and no fish.
“We didn’t eat today because we didn’t like the food that was served. When we don’t like the food being served, we either buy our own food from outside or go hungry and eat at home when school closes,” they said.
Class Five pupils of the Nima 1 Basic School, Hawa Ibrahim and Rahina Suleman, said it was difficult buying their own meals at the beginning of the term when they were not receiving food from the caterers.
They added that now the food came regularly there was no meat.
“For example, we ate beans without riped plantain today,” they said.
However, they commended the government for settling the debts to ensure the continuous running of the GSFP.

Addressing children’s concerns
Responding to some of the issues raised by the schoolchildren, the Head of Public Relations at the GSFP Secretariat, Mr Siba Alfa, said the secretariat had sent proposals to the relevant stakeholders to seek for increment in the money allocated to caterers.
He was hopeful that there would soon be an upward adjustment to ensure quality and regular food delivery services for all school children.
“The money allocation has been 97pesewas per child. The caterers have complained that the money given to them is woefully inadequate and requested for an increase from 97 pesewas to GH¢3 due to the high prices of food,” he said.
Mr Alfa assured the caterers that necessary attention was being given to the proposal, and that he was sure there would be an increment soon.
He, therefore, urged caterers of the GSFP to constantly provide the meals for the schoolchildren, as payment would be made based on the verified number of days they fed the schoolchildren.
“Currently, 98 per cent of the caterers in the 16 regions have been paid all arrears for the 2021 academic year. Those yet to be paid are caterers whose names don’t match with the information provided or those who have challenges with their e-switch accounts. Nonetheless, caterers who don’t cook will not be paid,” he noted.