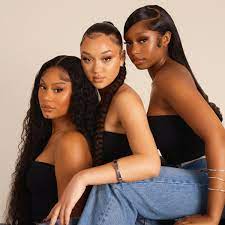 Previous winners of the annual list, which showcases the next big things in music, include Adele, Sam Smith and Pink Pantheress.

The UK girl group were told the news by Stormzy, who called the newcomers "a breath of fresh air" who had "killed it in every single department".

Their debut single, Cardboard Box, is layered with honeyed group harmonies and sassy one-liners, and was released last March.

"Never liked your momma, so I guess she's blocked / You may be crying, but boy, I'm not", they sing in the chorus.

The track's throwback R&B style earned comparisons with US girl bands like Destiny's Child, TLC and SWV; and they have picked up endorsements from Missy Elliot and Brandy, an unexpected turn of events that Douglas calls "the biggest honour".

"They're like the old school," she says. "Those people have really inspired us and influenced the music that we make."

In July, the trio released their debut EP, The Lead, which has been streamed more than 70 million times, leading to appearances on Jimmy Kimmel's US chat show and the BBC's Later... With Jools Holland.

Flo have arrived just in time to fill the girl band gap left by Little Mix, who played their farewell tour last year.

Like their predecessors, Flo say their message is "to be strong in yourself, to be confident".

"There is female empowerment - but everyone who listens should feel supported, inspired, independent," says Stella.

"We want them to feel the way music used to make us feel."

The Sound Of 2023 was voted for by more than 130 music industry experts, including representatives from Spotify, Apple Music, Glastonbury Festival, the BBC and former nominees including Dua Lipa, Stormzy, Sam Smith and Foals.

The list was open to new artists who had yet to achieve a top five album or more than two top 10 singles by 31 October 2022. Artists who had appeared on TV talent shows within the last three years were ineligible.

Fred Again, a producer for Ed Sheeran and Stormzy who has broken out as a solo artist making emotionally-cathartic dance music, was the runner-up.

Like many girl bands before them, Flo were put together through a process of auditions, call-backs, writing camps and rehearsals.

Their manager cycled through several permutations of the line-up as he sought the perfect blend.

At one point, Jorja and Stella were singing with another girl while Renée was in an adjacent room, rehearsing with a competing trio.

But the singers who eventually became Flo had a secret - they already knew each other.

Renée and Stella had studied together at the Sylvia Young Theatre School, and hooked up with Jorja (a former winner of CBBC singing show Got What It Takes) on social media before auditions began.

"Chemistry-wise, it's always been there," says Stella.

"It's an amazing thing," adds Jorja. "We were already predisposed to each other, so when our manager was doing all these different pairings, we expressed to him, 'We have a connection', and that's how the band happened.

"We didn't have to spend loads of time having sleepovers or team-building and stuff like that. We could just jump straight in because it felt so natural."

"Although we had to work on the dancing," laughs Stella. "Me and Renée danced at school, but I wouldn't have called myself a dancer."

"I can't quite run and sing yet," admits Jorja, "so I just do a nice little walk and go through our EP and sing all the songs."

Those songs hark back to an era when R&B was the planet's most progressive genre.

In the late 90s, producers like Timbaland, Kevin She'kspere Briggs and The Neptunes created juddering, alien soundscapes and smothered them with gorgeous harmonies from artists like Aaliyah, Destiny's Child and Kelis.

"Our mums brought us up on 90s music, so it's hard to make music that's not influenced by Brandy or Faith Evans or SWV," says Jorja.

"All the girl groups, all the boy groups. It happens naturally because that music is so ingrained in us."

To put a fresh spin on that sound, they hooked up with British production genius MNEK.

As the man behind hits like Little Mix's Touch and Beyoncé's Hold Up, he knows more than most how to graft a pop hook onto a cutting-edge beat, and has taken Flo under his wing - not just co-writing Cardboard Box but acting as an executive producer for their debut EP.

"He is the godfather of Flo," declares Renée. "He is our mentor. He is an icon. He is an inspiration."

But the musician says Flo's success is all self-generated.

"The magic is that they have taste," he tells the BBC. "They have a clear idea of who they want to be, what they want to sound like and what their point of view is.

Speaking to Flo at their record label offices just before Christmas, the determination and focus that MNEK mentioned is on full display.

Stella confesses she's been scheming to win a Brit Award since she was a child, while Renée seems bewildered by girl bands who don't write their hits.

"We're creating our own songs so of course we want to be a part of that," she says.

As a trio, they are tight-knit and self-assured. It's already part of Flo folklore that the band battled to have Cardboard Box released as their first single.

The record label wanted to hold it back, plotting a low-key launch that would build to the moment Cardboard Box became Flo's crossover hit. But the band had the other ideas.

"We were like, why would we hold back one of our best songs? Your first single is the most important," says Renée.

"It really sets the tone, it lets people know that we're here, we're strong, kicking the door down," adds Jorja.

"And Cardboard Box wasn't an end point for us," Renée concludes. "It was the beginning, it was the foundation. We want to top Cardboard Box, song after song."

The slinky, serpentine synths of Not My Job hint at the band's more experimental side, while the recently-released Losing You is a seductive slow jam that climaxes with a cascade of interwoven harmonies.

"We're always going to be outdoing ourselves," says Renée. "By this time next year, we want to be looking back at a successful album launch, a couple of successful shows and maybe a number one single."

The last couple of months have given the band a taste of how much work it will take to achieve those ambitions.

"It's so fast-paced that we don't even know what we've done and not done," says Jorja.

"We're being pulled in loads of different directions, but we're still excited for next year."

They couldn't do it without each other. Even Stella, who as a child dreamed of being a solo star like Whitney Houston or Mariah Carey, says she's glad to be part of a trio.

"To be solo in this position must be really difficult. Way more competitive. But with Flo, it's like I've found the sisters I never had."

"In other words," laughs Renée, "we have no other friends."