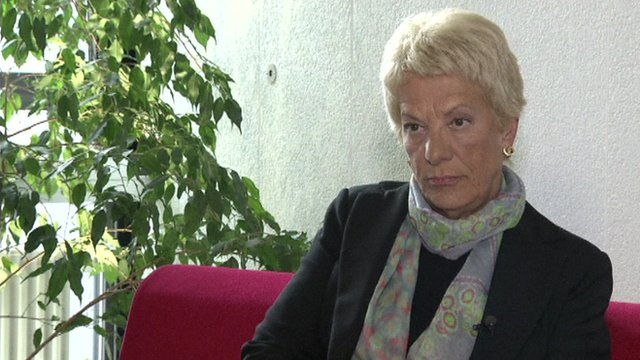 Testimony from victims of the Syrian conflict suggests rebels have used the nerve agent sarin, according to a leading United Nations investigator.

Carla del Ponte told Swiss TV there were "strong, concrete suspicions but not yet incontrovertible proof".

However, she said her panel had not yet seen evidence of government forces using chemical weapons.

Syria has recently come under growing Western pressure over the alleged use of such weapons.

Ms del Ponte, who serves on the UN Independent International Commission of Inquiry on Syria, said in an interview with Swiss-Italian TV: "Our investigators have been in neighbouring countries interviewing victims, doctors and field hospitals.

"According to their report of last week, which I have seen, there are strong, concrete suspicions but not yet incontrovertible proof of the use of sarin gas, from the way the victims were treated."

Ms del Ponte, a former Swiss attorney-general and prosecutor with the International Criminal Tribunal for the former Yugoslavia, did not rule out the possibility that government troops might also have used chemical weapons, but said further investigation was needed.

"I was a little bit stupefied by the first indications we got... they were about the use of nerve gas by the opposition," she said.

Ms del Ponte gave no details of when or where sarin may have been used.

Her commission was established in August 2011 to examine alleged violations of human rights in the Syrian conflict since March 2011.

It is due to issue its latest report to the UN Human Rights Council in Geneva in June.

Her comments might also complicate matters for the US Secretary of State John Kerry ahead of his visit to Moscow this week, says the BBC Diplomatic correspondent, Bridget Kendall.

If he was hoping to cite fears that the Assad regime was now using chemical warfare as a reason why the Russians should shift their position, that argument will not be so easy to make, our correspondent says.

A separate United Nations team was established to look specifically into the issue of chemical weapons.

It is ready to go to Syria but wants unconditional access with the right to inquire into all credible allegations.

Both the Syrian government and the rebels have in the past accused each other using chemical weapons.

The United States and the UK have said there is emerging evidence of Syrian government forces having used sarin, with the US saying it had "varying degrees of confidence" that chemical weapons had been deployed.

US President Barack Obama called in April for a "vigorous investigation", saying the use of such weapons would be a "game changer" if verified.

President Bashar al-Assad's government says the claims do not have any credibility, denouncing them as "lies".

Sarin, a colourless, odourless gas which can cause respiratory arrest and death, is classed as a weapon of mass destruction and is banned under international law.

Ms del Ponte's allegations concerning the use of sarin by rebels came after Israel carried out a series of air attacks on Syrian military targets early on Sunday.

Israeli officials said its military struck consignments of advanced Iranian missiles for delivery to the Hezbollah movement in Lebanon.

A more recent official statement has given more details, saying military positions in the Jamraya area were struck along with other facilities at Maysaloun near the Lebanese border and a military airport at Dimass.

The statement said there was massive damage at those locations and nearby civilian areas with many people killed or injured. It also denied that the targets included missiles on their way to Hezbollah.

Images on state TV showed large areas of rubble with many buildings destroyed or badly damaged.

The Arab League has condemned the raids and the United Nations Secretary General, Ban Ki-Moon, has expressed concern.

He said all sides should "exercise maximum calm and restraint" and "act with a sense of responsibility to prevent an escalation of what is already a devastating and highly dangerous conflict".