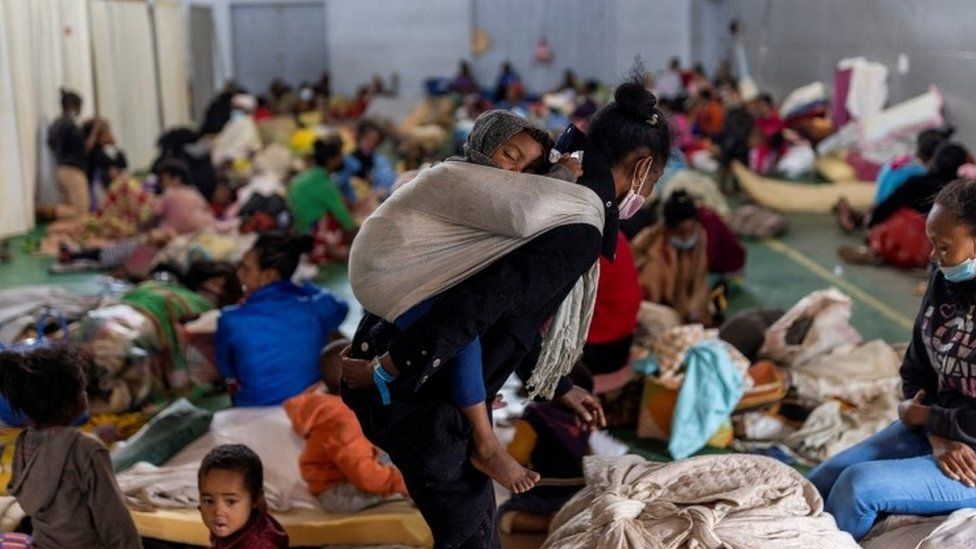 Evacuation shelters are now providing for those displaced by Cyclone Batsirai and Storm Ana
30.5k Shares

At least 10 people have been killed and nearly 50,000 displaced after Cyclone Batsirai brought strong winds and rain to Madagascar on Saturday evening.

Batsirai - the second major storm in two weeks - made landfall on the east coast, with gusts of 235km/h (146mph) and high waves hitting coastal areas.

Whole villages are reported to be almost completely destroyed.

The cyclone has now weakened, according to the national weather service.

Cyclone Batsirai has compounded the destruction, making landfall near the south-eastern city of Mananjary, 530km from the capital Antananarivo, at around 20:00 (17:00 GMT) on Saturday.

Electricity had not been available in Mananjary for two days and the water supply had been disrupted, according to local media. One resident told Reuters that even schools and churches due to be used as evacuation centres had had their roofs torn off.

In other places, the destruction was nearly total.

"It's as if we had just been bombed. The city of Nosy Varika is almost 95% destroyed. The solid houses saw their roofs torn off by the wind. The wooden huts have, for the most part, been destroyed," Willy Raharijaona, an adviser to the vice president of Madagascar's Senate, told Reuters news agency.

Environment Minister Vahinala Raharinirina told the BBC that many villages were nearly completely gone, with some being swept away by the storm.

In the east coast city of Mahanoro, the rising sea eroded a sandy hill which was part of a graveyard. Marie Viviane Rasoanandrasana, a 54-year-old widow, sat and watched as the bodies of her husband, father-in-law and daughter were exposed.

"We've already had damages at home because of the cyclone. Now this," she told AFP news agency.

Around 48,000 people have been displaced, according to the disaster management agency, although the UN World Food Programme (WFP) estimated that as many as 150,000 people could be forced to leave their homes.

Some of the displaced were moved to evacuation centres where victims of January's Tropical Storm Ana were also staying.

While the cyclone weakened as it moved inland, with the strongest gusts scaling back to around 110km/h, the country's meteorological agency said that the storm would cause "significant and widespread damage".

Experts fear that Cyclone Batsirai could prove to be even more destructive than Storm Ana, which also hit Mozambique, Malawi and Zimbabwe, and officials have called on the international community to offer assistance.

The WFP has prepared food stocks to distribute to those in need, while some people have already been evacuated. The UN has put rescue aircraft on standby.

The cyclone is expected to move westwards and emerge at sea in the Mozambique Channel later on Sunday but is then forecast to head south, avoiding mainland Africa.

The WFP says the recent pattern of destructive storms caused by global warming and climate change has caused failed harvests, high food prices and increased food insecurity in the region.

"The people of Southern Africa have been on the front lines of climate extremes for many years now and each passing storm sets them back, resetting the progress made," said senior WFP official Margaret Malu.

Experts say that extreme weather events like cyclones will become more frequent because of climate change.

Madagascar is also just recovering from the effects of a drought, which was also blamed on global warming.

The environment minister told the BBC that the country had submitted a plan to the COP26 climate conference, which showed it needed $1bn (£740m) a year to adapt to the effects of climate change.