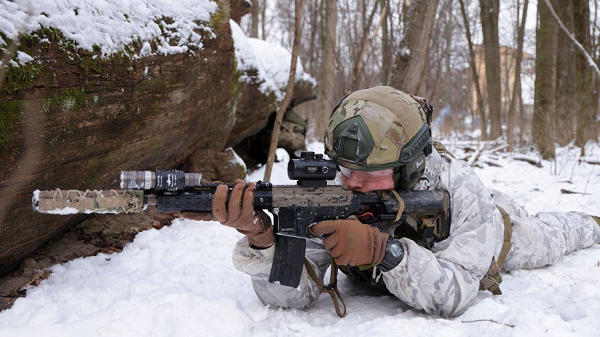 The UK has begun to withdraw staff from the British embassy in Ukraine amid warnings of a Russian invasion.

Officials say there have been no specific threats to British diplomats, but about half of the staff working in Kyiv will return to the UK.

The US has ordered relatives of its embassy staff to leave, saying an invasion could come "at any time".

Russia has denied plans for military action, but tens of thousands of troops have amassed on the border.

The embassy moves seem to be precautionary, and nothing specific is thought to have occurred in the past 24 hours to have triggered the decisions of the US and UK.

Staff working at the EU embassy will stay in place for now, with EU foreign policy chief Josep Borrell saying he would not "dramatise" the tensions.

Members of the Nato alliance, including Denmark, Spain, Bulgaria and the Netherlands, are sending more fighter jets and warships to Eastern Europe to bolster defences in the region.

With an estimated 100,000 Russian troops now at the border with Ukraine, the head of Nato has warned there is a risk of fresh conflict in Europe.

The decision by the US is one of a number of precautions the state department employs when crises could put American diplomats in harm's way, the BBC's Barbara Plett Usher reports.

A travel advisory said the situation was "unpredictable" and that "there are reports Russia is planning significant military action against Ukraine".

The US has warned people not to travel to Ukraine and Russia due to the "potential for harassment against US citizens". Non-essential embassy staff have been given permission to leave and US citizens have been told to do the same.

The US has stressed it is not an evacuation, but the state department told AFP news agency that if there was a Russian invasion, it would "not be in a position to evacuate US citizens".

Ukraine said it was "premature" of the US to withdraw staff and "a display of excessive caution".

On Saturday, some 90 tonnes of US "lethal aid" including ammunition for "front-line defenders" arrived in Ukraine.

US Secretary of State Anthony Blinken said the government was putting together a "series of actions that would figure into [Russian] President [Vladimir] Putin's calculus" including beefing up defences in Ukraine with more military assistance.

Russia has seized Ukrainian territory before, when it annexed Crimea in 2014, following fierce protests in Ukraine that toppled the country's pro-Russian president. Russian forces seized control of Crimea before the territory voted to join Russia in a referendum the West and Ukraine deemed illegal.

Russian-backed rebels control areas of eastern Ukraine near Russia's borders in a conflict which has cost an estimated 14,000 lives. A 2015 peace deal is far from being fulfilled.

On Sunday, the UK Foreign Office accused Mr Putin of planning to install a pro-Moscow figure to lead Ukraine's government.

UK ministers have warned that the Russian government will face serious consequences if there is an incursion.

US officials said they were concerned that Russia could try to topple and replace the Ukraine government but declined to comment on the UK accusation.