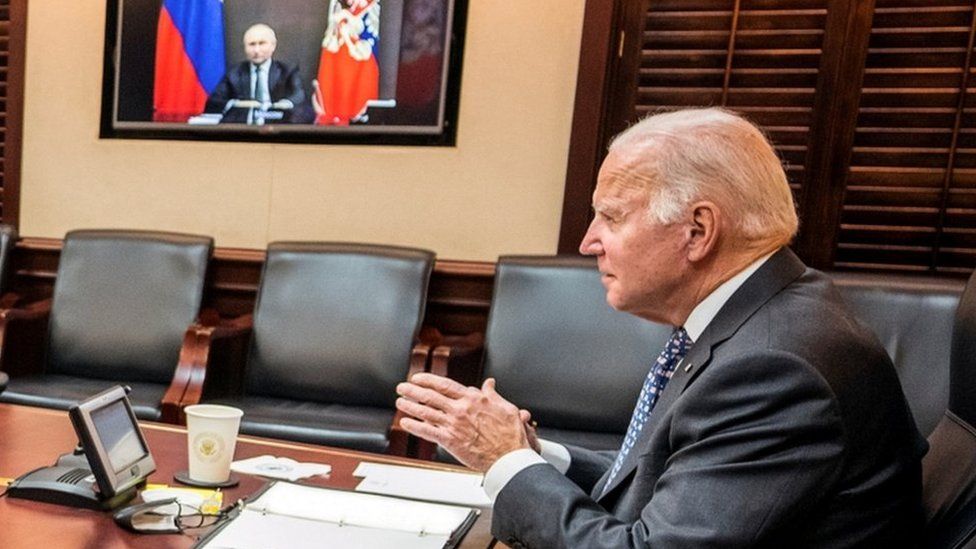 The presidents of the US and Russia held a 50-minute phone call late on Thursday
30.5k Shares

Russia's Vladimir Putin has warned his US counterpart Joe Biden that imposing new sanctions over Ukraine could lead to a complete breakdown in relations.

In a phone call late on Thursday, the Russian president said such sanctions would be a "colossal mistake".

Mr Biden, meanwhile, told Mr Putin that the US and its allies would respond decisively to any invasion of Ukraine.

The call, requested by Russia, was the pair's second such conversation this month and lasted for almost an hour.

It marked the latest effort to defuse tensions over Ukraine's eastern border with Russia, where Ukrainian officials say more than 100,000 Russian troops have been sent.

The build-up has prompted concern in the West, with the US threatening Mr Putin with sanctions "like none he's ever seen" if Ukraine comes under attack.

Russia, however, denies it is planning to invade the country and says the troops are there for exercises. It says it is entitled to move its troops freely on its own soil.

Although the two sides exchanged warnings during the call, Russian foreign policy adviser Yuri Ushakov told reporters shortly after that Mr Putin was "pleased" with the conversation. He added that it had created a "good backdrop" for future talks.

A senior US official, who spoke on condition of anonymity, said the tone had been "serious and substantive."

"President Biden reiterated that substantive progress in these dialogues can occur only in an environment of de-escalation," White House Press Secretary Jen Psaki said.

"He made clear that the United States and its allies and partners will respond decisively if Russia further invades Ukraine," she added.

US and Russian officials are set to meet for in-person talks in Geneva next month, and the White House said Mr Biden urged his Russian counterpart to pursue a diplomatic solution.

In a holiday message before Thursday's call, Mr Putin told Mr Biden he was "convinced" the pair could work together based on "mutual respect and consideration of each other's national interests".

His spokesman, Dmitry Peskov, said Moscow was "in the mood for a conversation".

"We believe that only through talks is it possible to solve all the immediate problems that we have in abundance between us," Mr Peskov added.