UK confirms holding up to 90 Afghans 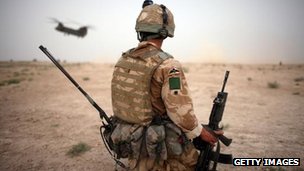 British forces are detaining 80 to 90 Afghan nationals in a holding facility at Camp Bastion, Defence Secretary Philip Hammond has confirmed. UK lawyers acting for eight of the men said they had been held for up to 14 months without charge in what could amount to unlawful detention.

They compared it to when the public became aware of Guantanamo Bay and they want the UK High Court to free the men.

But Mr Hammond said their release would put British troops at risk.

British forces in Afghanistan are allowed to detain suspects for 96 hours.

However, in "exceptional circumstances" - to gather critical intelligence, for example - they can hold them for longer.

UK lawyers acting for eight of the men being detained said their clients were arrested by British soldiers in raids in villages in Helmand and Kandahar provinces and have been held for between eight and 14 months without charge.

They claimed it amounted to unlawful detention and internment.

Lawyers for the men, whom the BBC has chosen not to name over fears for their safety, launched habeas corpus applications at the High Court in London on 18 April, with a full hearing due in late July.