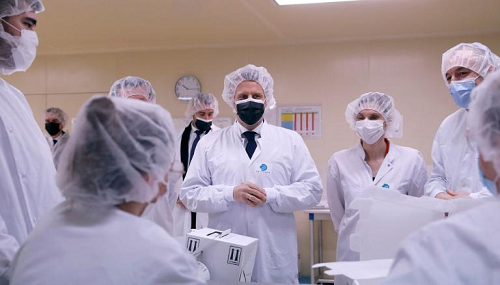 Around 3,000 healthcare workers have been suspended in France after failing to meet a government requirement to get vaccinated against Covid-19,  French Health Minister Olivier Véran told French radio station RTL Thursday.

The employees missed a September 15 deadline to be inoculated, which was introduced by the government in July.

In the southern city of Nice, 320 staff members at the University Hospital were suspended on Wednesday and around another 100 are still having their status checked, the facility's media relations officer Isabelle Battarel told CNN.

A dozen resignations have been handed in by healthcare workers over the policy, but Veran said there hasn't been "any chaos" stemming from the departures.

On July 12 French President Emmanuel Macron announced that all healthcare workers -- including those in hospitals, nursing and retirement homes and home-care nurses -- must be fully vaccinated against Covid-19 or risk suspension or dismissal from September 15.

There are about 2.7 million healthcare workers in the country.

Macron's move was part of a sweeping set of measures to encourage vaccinations after the rate of jabs slowed over the summer.

Since August, any adult without a "health pass" showing proof of their vaccination status or a recent negative test is unable to enter bars and cafes, or travel long distances by train.

The majority of the healthcare workers suspended so far are support staff, Veran said, adding that "a great number of the suspensions are only temporary."

"Many of them decided to get vaccinated, seeing the obligation was a reality," he said.

Veran added that the most important thing is that "all people in contact with fragile or elderly French people are henceforth vaccinated."

Almost two-thirds of France's population is fully vaccinated, with another 10% having had one dose of a two-jab regimen.

The country's seven-day coronavirus incidence fell on Wednesday below 100 positive cases per 100,000 people for the first time since July 18, according to public health agency data.