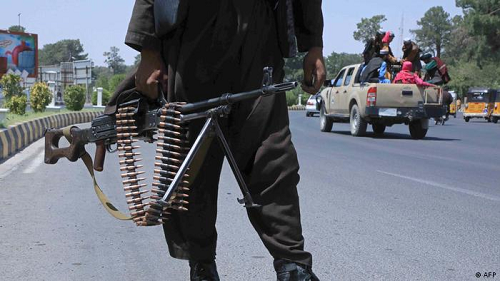 The Afghan capital is the last major city to be held by government forces, after all other key cities fell to the Taliban offensive. The militant group said they have no plans to take Kabul by force.

Albania agrees to US Afghan request

Albania has accepted a request from the Biden adminstration to take in Afghan refugees seeking visa to enter the United States.

Writing on Facebook, Prime Minister Edi Rama cited US support for his country during previous conflict in the Balkans region as one reason for agreeing to the request.

"We will not say 'No, not just because our great allies ask to," he said. "But because we are Albania."

The Reuters news agency reported on Friday that the US was in talks with Kosovo and Albania to welcome Afghans who had worked for their military over the past two decades.

The move is aimed at protecting them from potential reprisals by the Taliban.

US broadcaster NBC News reported earlier on Sunday that base had been taken by the Taliban, citing sources from the Islamist militant group.

The Afghan government has not commented publicly on the reports.

The German outlet did not cite how it obtained the information.

Several A400M transport planes are to fly to the Afghan capital to ferry people home, the report said.

The Afghan official said the goal was a peaceful hand over of the government to the Taliban.

Interior Minister Abdul Sattar Mirzakwal also said in a recorded speech that there would be "no attack on the city" and that "a peaceful transfer of power to the transitional government" was in the works.

Britain vows to evacuate nationals, staff
Britain's government said on Sunday that it was working on evacuating its citizens and former UK staff from Afghanistan.

"Home Office (interior ministry) officials are right now working to protect British nationals and help former UK staff and other eligible people travel to the UK," it wrote on Twitter.

The UK government has come under criticism from some British newspapers for not doing enough to help Afghans who worked with its military over the past two decades.

The Taliban, an Islamist militant group that has seized large parts of Afghanistan, started entering the outskirts of Kabul on Sunday, local officials said.

Gunfire and sirens were heard sporadically across Kabul.

The Afghan capital is the last major city held by government forces after insurgents made several advances elsewhere this month amid the withdrawal of allied troops.

The Taliban later pledged not to take the capital "by force."

"No one's life, property and dignity will be harmed and the lives of the citizens of Kabul will not be at risk," the militant group said in a statement.

Taliban spokesman Suhail Shaheen later told the Al-Jazeera English channel that they are "awaiting a peaceful transfer of Kabul city'' after they entered the capital's outskirts.

Shaheen declined to offer specifics on any possible negotiations between his forces and the government.

The Taliban started an offensive nearly two weeks ago, capturing a number of key towns, cities and border posts.

Sunday's move on Kabul comes as international forces start to evacuate their diplomats amid the worsening security situation.

US intelligence officials said earlier this week that they believed it might take as long as three months for the Taliban to seize the Afghan capital.

Peace talks have been taking place in Doha, Qatar, since last September between the Afghan government and the Taliban.

But the negotiations, which are being mediated by the international community, have failed to bear fruit.

In a televised speech on Saturday, Afghan President Ashraf Ghani vowed that he would not give up the "achievements" of the past 20 years.

He warned that the country is in "serious danger" of facing "instability."

Ghani, an academic economist who spent most of his career in the United States, became president in 2014, winning a second term five years later.