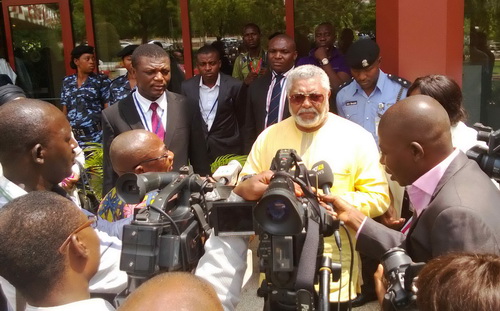 The office of former President Jerry John Rawlings has discounted a news account by the Premium Times of Nigeria of the June 17, 2013 address he gave at a Conference on Emerging Democracies in Africa: Challenges and Opportunities at the Transcorp Hilton, Abuja-Nigeria.
A statement signed and issued by Rtd. Naval Captain Hillary Afeku-Amenyo, Director of the office of the former president, said the “report is laced with irresponsible falsehoods, fabricated quotations and wrong allusions that bring the image of His Excellency Jerry John Rawlings into disrepute.”

Below is the statement from Rawlings’ office

The attention of His Excellency Jerry John Rawlings has been drawn to a scurrilous news report originally published by the Premium Times of Nigeria, which has received wide coverage on the Internet and other social media.

We wish to state strongly that the report is laced with irresponsible falsehoods, fabricated quotations and wrong allusions that bring the image of His Excellency Jerry John Rawlings into disrepute.

President Rawlings did deliver the keynote address on Emerging Democracies in Africa: Challenges and Opportunities, at conference organised by the National Institute for Legislative Studies in Abuja on Monday, June 17, 2013.

His address did not make reference to the government of Nigeria and he made no scathing attack on the Nigeria government as the Premium Times reported.

President Rawlings also did not make reference to the Nigeria leadership’s failure to punish politicians who steal public funds.

The first three paragraphs of the report are complete fabrications.

Paragraph ten and twelve are distortions of what President Rawlings said. Because of the gross distortions and falsehoods the entire report does portray a totally different representation of the fact as took place at the Transcorp Hilton, Abuja on June 17.

We have taken a very serious view of the publication because it is malicious, libellous and a very negative piece of journalism, which is calculated to bring the image of President Rawlings into disrepute and written to demand a retraction of the publication.

Below is the full text of President Rawlings’ address at the conference on Monday June 17.