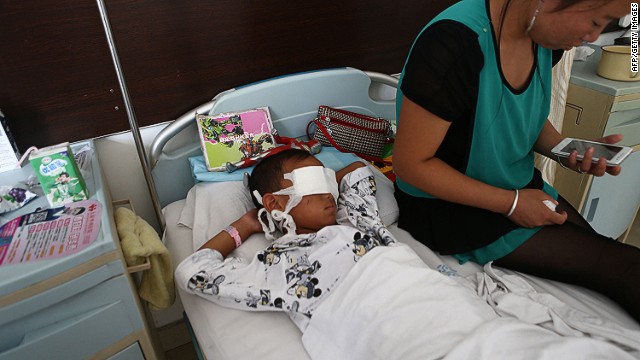 (CNN) -- A 6-year-old boy was recovering in hospital in China's Shanxi province on Wednesday after his eyes were gouged out in an attack that has left him permanently blind, according to state media reports.

Local police said a female suspect had gouged out the boy's eyes on Saturday evening, but ruled out the possibility that organ traffickers had carried out the attack.

Earlier state media reports said the boy, named as Xiao Binbin from Fenxi County in Shanxi Province, was found four hours after he went missing in a drugged state and missing his eyeballs, China Central Television said on its Sina Weibo account.

The reports claimed the boy's eyes were found nearby with the corneas missing, which local police have since denied, according to state media.

State media pictures on CCTV news Weibo showed pictures of a boy with bandages over his eyes recovering in hospital while his stricken relatives cried at his bedside.

China has traditionally relied on executed criminals to harvest transplant organs in a country where few people donate organs. In 2008, just 36 people donated organs out of a population of 1.3 billion people. A government donation program run by the Red Cross Society has had just under 3,000 donations the past three years, according to Xinhua.

About 300,000 patients have organ failure each year, but only about 10,000 transplants are done each year due to donor shortages, Xinhua reported.

On September 1, national health officials will launch a computerized system to match organs to patients among the 165 hospitals permitted to carry out transplants.