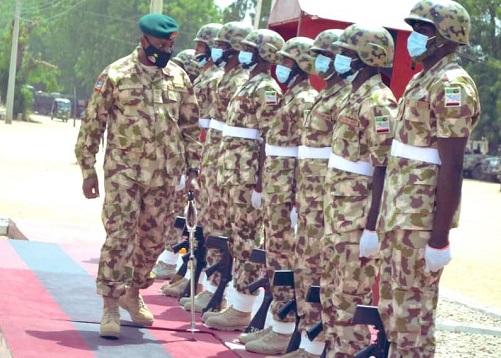 The Nigerian Soldier arrested for accepting a marriage proposal while in uniform has been pardoned.

She was pardoned after pleas on her behalf for clemency. She she has been told to go and sin no more.

Nigeria's online platform, Vanguard, said the Chief of Army Staff, Lt. Gen. Faruk Yahaya pleaded with the military authorities to pardon her after she was found to have breached the military code of conduct.

A video of the soldier emerged last week in which a male member of Nigeria's National Youth Service Corps knelt before her and proposed marriage. The lady accepted the proposal.

According to Vanguard, the Chief of Army Staff in spite of his intervention, "maintained that the erring soldier should be strongly reprimanded against engaging in any kind of act that contravenes the military code of conduct for its officers and men.