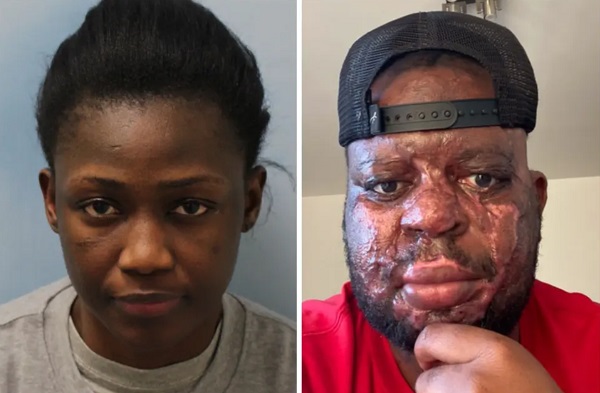 A Ghanaian woman has been sentenced to 14 years in a United Kingdom prison after dousing her sleeping boyfriend with acid while he was asleep.

Esther Afrifa claims she carried out the vile attack on Kelvin Pogo because she thought he was having an affair – but it later turned out he was not.

The 28-year-old bought a litre of sulphuric acid online and poured it over her then-29-year-old boyfriend at their Wembley home.

The attack happened at 3.30 am on December 22, 2019, and burned through his t-shirt quickly, Harrow Crown Court heard this week.

Speaking to the Evening Standard, Mr Pogo, who now has life-altering scars all over his face and body, said: “Every day I wake up is like the day she attacked me. It's like time has stopped.

“Every time there is a knock at the door I'm scared someone is going to hurt me. She used to be my world and she did this to me. I just can't understand it.”

When the incident first took place, he did not realise who was responsible and told Ms Afrifa to call the police – she pretended to do so, before stopping another friend from calling 999. She then cancelled a taxi which was supposed to take him to the hospital.

And to make it worse, she poured more acid over his face and body while he was lying on the couch resting the wounds he had already suffered.

After Kelvin ran out of their flat screaming, a member of the public managed to get him medical attention.

Mr Pogo also told the court how Ms Afrifa attempted to get him to drink even more acid from a Nike sports bottle but was stopped due to his lack of trust in tap water, dating back to his childhood in his native Africa.

Sentencing the jealous woman, Judge Charles Bourne QC called it “a truly wicked thing to do”.

And Detective Constable Tom Dawood, the investigating officer, said: “I would like to commend colleagues from London Ambulance Service and London Fire Brigade who attended the scene quickly and provided vital first aid that has undoubtedly reduced the severity of his injuries.

“I am pleased that Afrifa has been brought to justice for her horrific crime and will now serve a significant custodial sentence.”

Ms Afrifa will more than likely be deported back to her native Ghana upon release.